The US administration has been pushing Israel to avoid taking unilateral steps that would further damage ties with the Palestinians in the lead-up to President Joe Biden’s trip to Israel and the West Bank next month, two Israeli and Palestinian officials told The Times of Israel Wednesday.

The messages were passed along in a series of meetings a visiting US delegation held with senior Israeli and Palestinian officials over the past week. Recent meetings and conversations US officials have held with Palestinian Authority officials “set off a warning light” for Washington regarding the urgency of the problem and the nadir to which Israeli-Palestinian ties had plummeted, a source familiar with the matter said.

The US is particularly concerned about an Israeli effort to advance what critics call a “doomsday” settlement construction plan in the E1 area of the West Bank. After repeated delays due to international pressure, the Defense Ministry put the project on the docket for a July 18 hearing, during which legal objections to the plan will be raised and likely dismissed.

The visiting delegation led by US Assistant Secretary of State for Near Eastern Affairs Barbara Leaf urged Israel to scrap the hearing, which would take place just four days after Biden’s trip, the Israeli and Palestinian officials said.

The Israeli official said Jerusalem would not be able to commit to such a request at this stage, given the fragility of the government, which includes right-wing settlement supporters who are on the verge of bolting. The official said a delay of the E1 plan may be in the cards closer to the hearing date but also downplayed the significance of the session, saying that the project still has a ways to go before ground can be broken.

The plan would see 3,412 homes built between the Ma’ale Adumim settlement and Jerusalem, in the middle of the West Bank, breaking up contiguity between Palestinian neighborhoods in East Jerusalem and the Palestinian cities of Ramallah and Bethlehem. 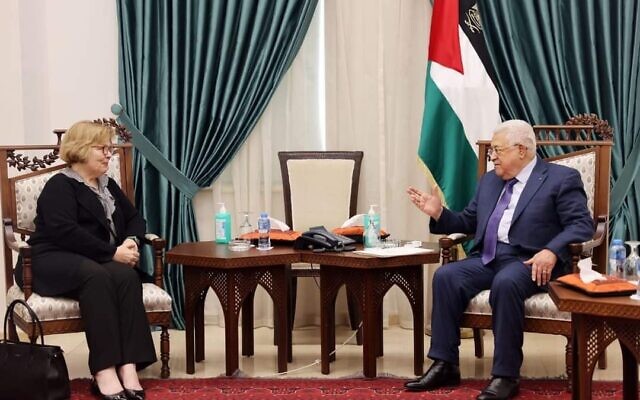 US Assistant Secretary of State for Near Eastern Affairs Barbara Leaf (L) meets with Palestinian Authority President Mahmoud Abbas at the latter’s office in Ramallah on June 11, 2022. (State Department/Twitter)

The Biden aides also urged Israel to cease military operations such as home demolitions and evictions in the West Bank and East Jerusalem as well as raids of Palestinian towns in Area A of the West Bank, which are supposed to be under full PA control. The Israeli army regularly enters Area A, but such operations have increased in recent months amid a deadly terror wave that took the lives of 19 people.

In one of those raids in the northern West Bank city of Jenin, Al Jazeera reporter Shireen Abu Akleh was shot dead. The PA says the reporter was deliberately targeted by the IDF, while Israel says the killing unfolded during a firefight with Palestinian gunmen and that it can only determine who was responsible if the PA hands over the lethal bullet.

Claiming Israel will use the evidence to whitewash the killing, Ramallah has thus far refused to heed Jerusalem’s call. However, US administration officials used recent meetings with Palestinian officials — including PA President Mahmoud Abbas and Civilian Affairs Minister Hussein al-Sheikh — to press them to hand over the bullet to Israel, a Palestinian official said.

For their part, the Israeli ministers meeting Leaf declined to commit to ease military operations in the West Bank, saying they are launched based on security necessity, the Israeli official said. However, the Walla news site reported that Israel has heeded the call in at least one case, delaying the punitive home demolition of the shooter from the April Tel Aviv terror attack from Wednesday until after Biden’s trip.

The State Department did not immediately respond to a request for comment on the matter.

In a phone call last month, Abbas warned US Secretary of State Antony Blinken that he was on the verge of downgrading ties with Israel over the latter’s “violations in international law in East Jerusalem and the West Bank,” a Palestinian official said.

Abbas has become increasingly angry with the US administration in recent months over its perceived failure to roll back measures imposed by the Trump administration.

It was a pleasure hosting the new @StateDept_NEA A/S Barbara Leaf. She held productive meetings with various Israeli officials, business leaders & civil society activists, reaffirming that the U.S. commitment to Israel is ironclad. A first visit of hopefully many to come! pic.twitter.com/GA9ivoghuY

Leaf’s delegation sought to reassure Ramallah that Washington is still working to maintain prospects for a two-state solution, even as US officials say that they have no intention of launching a peace initiative in the foreseeable future.

Initial goodwill that the US and Israeli governments built with Ramallah last year has all but dissipated in recent months. Biden restored diplomatic ties along with hundreds of millions of dollars in aid to the Palestinians within months of taking office and also announced that he would reopen the US consulate in Jerusalem — the de facto mission to the Palestinians that was shuttered by former president Trump in 2019. But facing significant opposition from Israel’s fragile coalition, he has since held off on fulfilling the campaign pledge, infuriating the PA.

Last week, the US announced that it had restored a line of communication for the PA that had been cut by Trump. The unit that had once served independently as the Jerusalem consulate before it was folded into the US Embassy to Israel will once again report directly to Washington, instead of to the US ambassador to Israel, in a bureaucratic, yet symbolic, step.

Refusing to be considered a subset of US relations with Israel, the PA has been largely boycotting the Palestinian Affairs Unit — now called the Office of Palestinian Affairs — and there were no indications after Thursday’s announcement that the policy in Ramallah would change.

The US has also been planning to name Deputy Assistant Secretary Hady Amr to the role of special envoy to the Palestinians in a further step aimed at boosting ties with the PA, but Abbas did not take well to the idea during his call with Blinken and it has since been put on hold, two US and Palestinian officials told The Times of Israel earlier this week.

Abbas’s office said he used the Saturday meeting with Leaf to once again demand that the US reopen the consulate as well as the Palestinian Liberation Organization’s diplomatic mission in Washington. Biden pledged during his campaign to reopen the office that was shuttered by Trump in 2019. Abbas also called on Biden to scrap 1987 legislation deeming the PLO a terror organization — a step that would expose the Democratic president to criticism from rivals who demand that the PA reform its welfare policy, which includes payments to security prisoners and the families of attackers who have killed Israelis.

The PA’s ties with Israel have also hit a nadir over the past two months, which included the advancement of plans for 4,500 settlement homes, weeks of clashes between Palestinians and Israeli police on the Temple Mount, the killing of Abu Akleh and the Jerusalem Day Flag March, during which Israeli nationalists chanted racist slogans and harassed Palestinian in the Old City.

Biden is scheduled to visit Israel and the West Bank on July 13 and 14 before flying directly to Saudi Arabia, where he will meet with the leaders of the six Gulf Cooperation Council members — Saudi Arabia, the United Arab Emirates, Bahrain, Oman, Qatar and Kuwait — plus heads of state from Iraq, Egypt and Jordan.

The trip will include efforts to strengthen Israel’s budding ties with its Arab neighbors, including Riyadh, which does not have formal ties with the Jewish state.