The US Embassy in Jerusalem has issued restrictions to its employees and their families on entering the Old City ahead of Sunday’s contentious Jerusalem Day Flag March.

In a statement issued Wednesday, the embassy banned all US government employees, as well as their families, from entering the Old City at any time on Sunday, May 29, the day the march is slated to occur, and on the previous Friday, when there is higher Muslim turnout of prayers.

The embassy also told employees and their families that — at least through Monday — they cannot enter the Old City after dark. In addition, the statement said, employees cannot use Damascus, Herod’s, and Lions’ gates.

The ban is being instituted due to “ongoing tensions and potential security issues,” the embassy said, without explicitly naming the Flag March. The embassy also urged all US citizens in Israel to “remain vigilant and take appropriate steps to increase their security awareness” at this time.

The Flag March generally attracts thousands of hardline Israeli nationalists who march through the Old City’s Muslim Quarter to reach the Western Wall to mark the anniversary of the city’s unification during the 1967 Six Day War. The event, known as Jerusalem Day, is celebrated as a national holiday.

The embassy warning comes after several deadly terror attacks in Israel in recent weeks and spiraling tensions and threats in Jerusalem, centered on the flashpoint Temple Mount and its Al-Aqsa Mosque. Ahead of the march, the Israel Police has ratcheted up its readiness alert level in Jerusalem and so-called mixed Jewish and Arab cities throughout the country to be prepared for any outbreaks of violence. 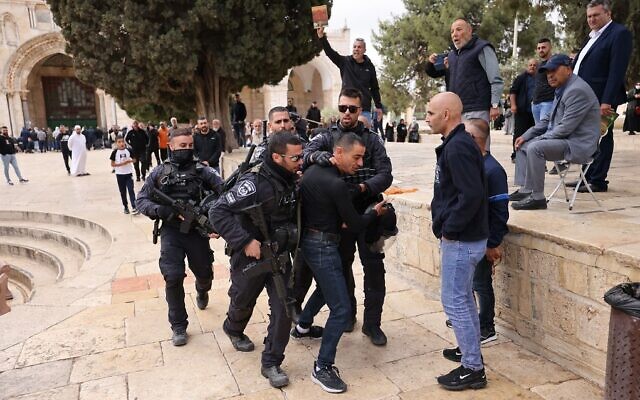 Israeli police restrain a Palestinian amid clashes at the Temple Mount on May 5, 2022, as the Jerusalem holy site was reopened to non-Muslim visitors. (Ahmad Gharabli/AFP)

On Thursday, several lawmakers publicly criticized the march, saying it causes too much friction.

“Factually speaking, the Flag March endangers the lives of Israelis and Palestinians,” Environmental Protection Minister Tamar Zandberg of the left-wing Meretz party told Army Radio. “All of us become victims. In my opinion, the march’s goal is to create a wedge.”

MK Walid Taha from the Ra’am party called the march a “disgraceful provocation.”

“We are an integral part of the Palestinian nation and we reject this,” he told Makan News, the Arabic radio station run by Israel’s public broadcaster.

The Biden administration has pressured Israel to reroute the controversial Jerusalem Day Flag March away from Damascus Gate and the Muslim Quarter of the Old City, an Israeli official told The Times of Israel on Wednesday. 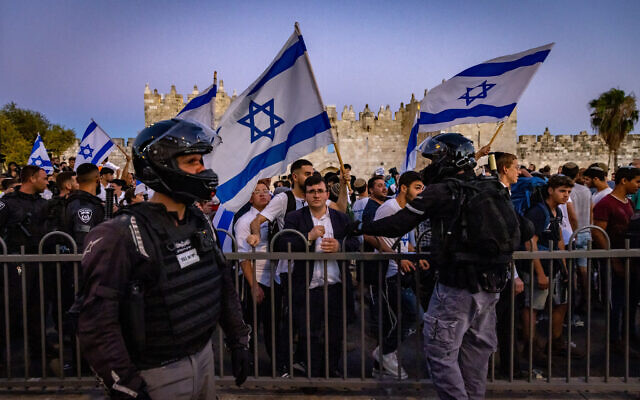 Public Security Minister Omer Barlev approved the traditional route from Safra Square to the Western Wall via the Muslim Quarter.

Palestinians have long deemed the event a provocation. Palestinian shop owners in the Old City are sometimes forced to close down early on the day of the march to make way for the right-wing marchers — though police have said they largely do so of their own accord.

Hezbollah terror group leader Hassan Nasrallah on Wednesday warned that if Israel “violates” mosques on the Temple Mount in Jerusalem it will cause “an explosion in the region,” adding to threats from terror groups Hamas and Palestinian Islamic Jihad in Gaza against the march.

During last year’s event, Hamas fired several rockets at Jerusalem as the march was underway, touching off a deadly 11-day conflict between Israel and terror groups in Gaza.