An undercover Border Police officer was lightly injured Sunday morning during clashes between Israeli security forces and Palestinians in the Dheisheh refugee camp south of Bethlehem.

The officer was lightly hurt by shrapnel when an explosive device was thrown toward troops during an operation inside the refugee camp.

The officer was taken to Jerusalem’s Shaare Zedek Medical Center for treatment.

According to reports, three Palestinians were also wounded in the clashes with Israeli troops. There were no further details on their conditions.

In a statement, police said that the undercover officer was involved in the operation at the home of a suspect.

When they left the refugee camp, police said, they were attacked by rioters who threw rocks and more explosive devices.

“Hits were identified at a number of terrorists who hurled explosives,” police said. Police did not say if the suspect was detained. 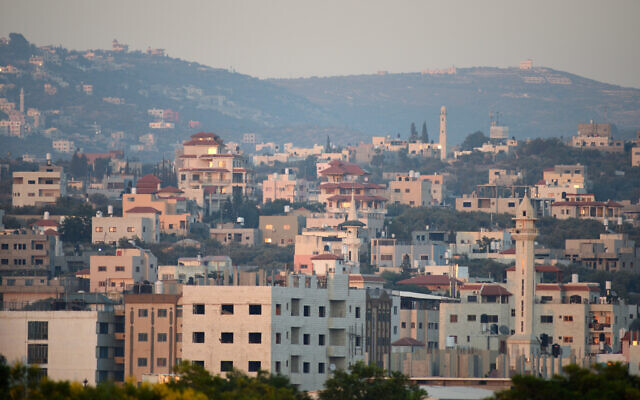 The Palestinian city Tulkarem, situated on the western edge of northern West Bank, on July 18, 2018. Photo by Gili Yaari/Flash90

In a separate operation, the IDF said troops detained two Palestinians suspected of involvement in terror activities in Danaba, a neighborhood of the West Bank city of Tulkarem, but did not elaborate on the suspicions against the pair.

They were taken to be questioned by the Shin Bet security agency.

The IDF also said it received an overnight report of shooting toward an Israeli vehicle at Zif Junction, south of Hebron.

The driver was unharmed in the incident, and no damage was caused to his vehicle.

Troops went to the scene, where they found several shell casings in the area.

Tensions are running high in the lead-up to the annual Jerusalem Day Flag March set to take place Sunday afternoon, which Palestinians view as a provocation, with participants expected to chant nationalist slogans and wave flags as they walk through the Old City’s Muslim Quarter.

Even before Sunday, Israeli security forces have stepped up their operations in the West Bank following a deadly wave of terror attacks inside Israel that have left 19 people dead since March 22. The raids have concentrated on the increasingly unstable Jenin area, from where several of the attackers hailed.

The violence has left over 30 Palestinians dead in the same period.

Some of the Palestinians were killed while attempting to commit violent acts of terror, others while participating in violent clashes with Israeli troops. Still, others seem to have been uninvolved civilians — such as Al Jazeera journalist Shireen Abu Akleh. The veteran correspondent was killed earlier this month under disputed circumstances in Jenin during a gun battle between Israeli soldiers and Palestinian gunmen.