The United Nations has announced a $5 million crowdfunding campaign to help prevent the imminent breakup of an aging supertanker that holds over a million barrels of oil — four times the amount spilled in Alaska by the Exxon Valdez in one of the world’s worst ecological disasters.

If the FSO Safer, moored off the coast of Yemen, breaks up or explodes, the resulting oil spill would ravage pristine reefs, coastal mangroves, and other sea life across the Red Sea; cause massive air pollution throughout the region; likely force the Hudeidah and Saleef ports to close, cutting off supplies to war-torn Yemen, where 17 million people already need food aid; and choke the movement of vessels through some of the world’s busiest shipping lanes.

It would take 25 years for fish stocks to recover, cost $20 billion to clean up, and deprive coastal communities of their income from fishing for years, the UN has warned.

“The United Nations is ready to implement an emergency operation to prevent this disaster,” a UN statement said. “But the work to transfer the oil to a safe vessel is already delayed because of insufficient funding.”

The UN estimates that it needs $144 million to deal with the ship, of which $80 million would be for the emergency transfer of oil to a temporary storage site. The rest would finance a permanent replacement of the ailing vessel.

Just $60 million has been committed — by European donor nations, Qatar, Saudi Arabia, and the US. 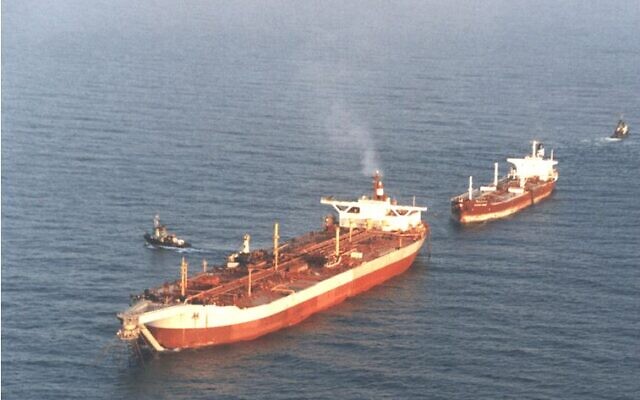 The FSO Safer in an undated photo. (Courtesy: Safer Exploration and Production Operations)

Donations by the public through crowdfunding would send “a message to all other member states and private companies, foundations that have not yet contributed or could contribute that they also need to act now before it’s too late,” David Gressly, the UN’s Resident and Humanitarian Coordinator, told a press briefing earlier this week.

He said that an operational plan had been approved by Yemen, salvage equipment had been procured, and “we’re basically pretty ready to go.”

It was important to transfer the oil before October or November when choppier seas could speed the tanker’s breakup, he went on, adding that all countries bordering the Red Sea — including Israel — are at risk from a spill.

“Twenty million dollars is really not much when you look at the overall cost that this catastrophe would have,” Gressly went on.

“If indeed there were a spill, the estimates that we’ve received on the cleanup alone would be $20 billion. A $20 million additional investment today to save $20 billion seems like a very easy business case to make. A return of $1,000 on every dollar invested. But that $20 billion is just the cleanup cost. It doesn’t count the other costs that will affect the region.”

The 400,000-metric-ton tanker was abandoned off Yemen’s coast in 2015 when political tensions were rising and has not had any maintenance work carried out since then.

For years, Iran-backed Houthi rebels used the ship as a bargaining tool and prevented salvage experts from going on board. They relented earlier this year and agreed to the oil transfer, on the condition that they keep the rights to the oil.