KYIV, Ukraine — Ukraine has received just 10 percent of the weapons it requested from the West to help fight off the Russian offensive, the Ukrainian deputy defense minister said Tuesday.

“From what we said we need, we got about 10 percent,” Anna Malyar said in televised remarks, saying the West should speed up its delivery schedule.

“No matter how hard Ukraine tries, no matter how professional our army is, without the help of Western partners we will not be able to win this war.”

There should be “a clear timeframe” for such deliveries as every delay cost Ukraine dearly and risked more territory falling into Russian hands.

“We need to know clear deadlines because every day there’s a delay, we’re talking about the lives of Ukrainian soldiers and civilians,” she said.

“We can’t wait very long, because the situation is very complicated,” she added, referring to the creeping Russian advance in Donbas, where Moscow’s forces are poised to take over the entire Luhansk region. 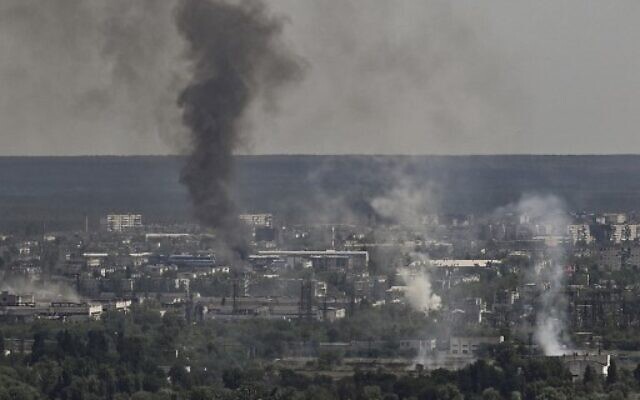 Smoke and dirt rise from the city of Severodonetsk during fighting between Ukrainian and Russian troops in the eastern Ukrainian region of Donbas, June 14, 2022. (Aris Messinis/AFP)

Earlier, Ukrainian President Volodymyr Zelensky again appealed for heavy weapons from the West, criticizing the “restrained behavior” of some European leaders which he said had “slowed down arms supplies very much.”

“I am grateful for what is coming, but it must come faster,” he told Danish journalists in an online briefing.

Russia, he said, had “hundreds of times more equipment and weapons” than Ukraine, which did not have enough “long-range weapons” nor “armored vehicles, and because of that we are losing people,” he said.

The speed with which Ukraine was able to retake territory occupied by Russia “really depends on this aid and weapons.”

“If there’s no speeding-up of weapons deliveries, there will be stagnation… people will continue dying. If we are given weapons, we’ll move forward,” he added.