The cases in the industrial region are among some 15,000 across Ukraine since Russian forces invaded on February 24, Ukrainian prosecutor general Iryna Venediktova said.

“Of course we started a few thousand cases about what we see in Donbas,” Venediktova told a news conference in The Hague as she met international counterparts.

“Then, of course, we can speak about torturing people, killing civilians and destroying civilian infrastructure.”

Ukrainian authorities did not have access to Russian-held areas of Donbas, but they were interviewing evacuees and prisoners of war, Venediktova told the press conference at the headquarters of EU judicial agency Eurojust. 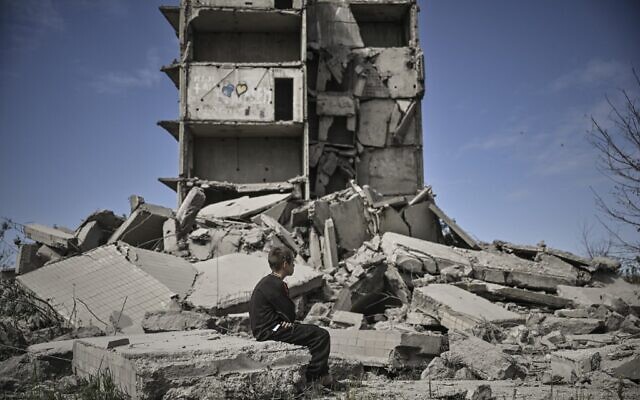 A young boy sits in front of a damaged building after a strike in Kramatorsk in the eastern Ukrainian region of Donbas, on May 25, 2022. (Aris Messinis/AFP)

In total, Ukraine had identified 15,000 war crimes cases since the Russian invasion with 200 to 300 more coming in every day, she added.

Ukraine had identified 600 suspects for the “anchor” crime of aggression, including “high level of top military, politicians and propaganda agents of [the] Russian Federation,” the prosecutor general said.

Nearly 80 suspects had been identified for alleged war crimes that had actually taken place on Ukrainian soil, she added.

Two Russian soldiers were jailed for 11 and a half years by a Ukrainian court on Tuesday for shelling civilian areas, while another was jailed for life earlier this month for murdering a civilian.

Prosecutors from Poland, Lithuania and from the Hague-based International Criminal Court are already part of the team. 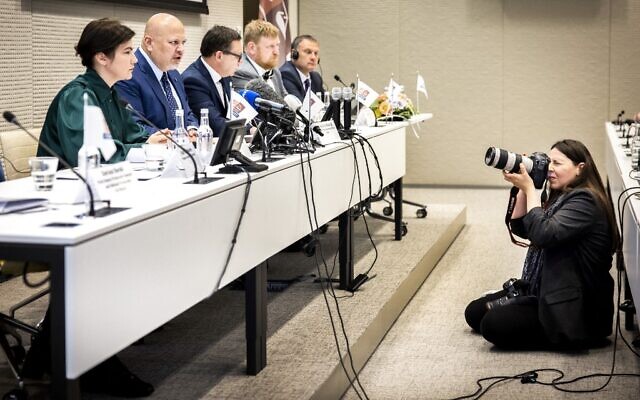 “Today is a momentous day that the (team) has three new members,” ICC prosecutor Karim Khan said at a news conference alongside the Ukrainian prosecutor.

The ICC was “hopefully” going to open a field office in Kyiv in the next few weeks to have a more permanent base for its investigation in Ukraine, Khan added.

The ICC earlier this month dispatched the largest team of investigators in the court’s 20-year history to probe suspected war crimes and crimes against humanity in Ukraine. 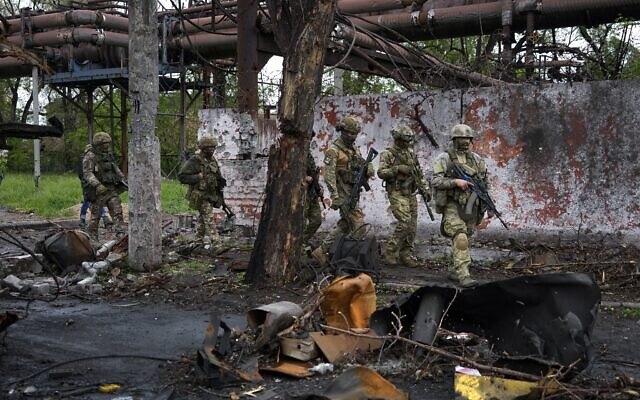 Russian troops walk in a destroyed part of the Illich Iron & Steel Works Metallurgical Plant in Mariupol, in territory under the government of the Donetsk People’s Republic, eastern Ukraine, May 18, 2022. (AP Photo, File)

Ukraine’s Venediktova said she hoped her country would handle “95 percent” of cases but that some larger or more difficult ones could be dealt with by the ICC.

Russia’s invasion and the subsequent discovery of hundreds of killings in places such as the Kyiv suburb of Bucha have prompted unprecedented international investigative efforts.

“Never in the history of armed conflict has the legal community responded with such determination,” Eurojust President Ladislav Hamran said.