Prime Minister Naftali Bennett on Tuesday toured a laser air defense system the Defense Ministry is developing, hailing it as a “strategic tiebreaker” for Israel, ahead of planned trial deployment.

The ministry has been testing the laser-based defense system for several years, shooting down drones, unguided rockets and anti-tank guided missiles in a series of tests in March.

“It’s a tiebreaker because not only we are beating the enemy militarily, but we  are also impoverishing it financially. Until today it would cost us a lot of money to intercept each rocket. Today, they can invest tens of thousands of dollars in a rocket and we will invest two dollars of the cost of electricity in intercepting the rocket,” Bennett said.

The ministry’s research and development department initially planned to deploy the anti-missile system by 2024, but the military has pushed for an earlier deployment. Bennett announced in February that Israel would deploy the system within the year.

But in March, Defense Minister Benny Gantz said: “It will take time, it isn’t a short process, but we will get it done in the shortest amount of time possible.”

This was apparently driven by concerns that in a future conflict, the military would not have sufficient interceptor missiles for the Iron Dome and other air defense systems to shoot down incoming rockets, missiles, and drones.

The ground-based laser system — dubbed Iron Beam — which is being developed with the Rafael weapons manufacturer, is not meant to replace the Iron Dome or Israel’s other air defense systems, but to supplement and complement them, shooting down smaller projectiles and leaving larger ones for the more robust missile-based batteries. 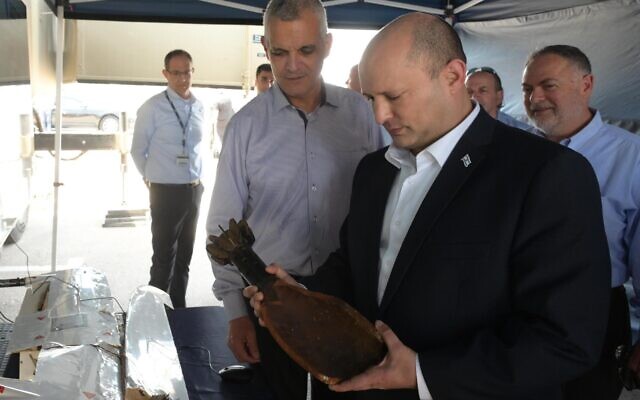 Prime Minister Naftali Bennett (right) is shown a mortar intercepted by a new laser-based air-defense system at a Rafael weapons manufacturer complex in Israel, on May 31, 2022. (Amos Ben Gershom/GPO)

According to the ministry, Israel is among the first countries in the world to succeed in using powerful laser technology to develop a working air defense system and to demonstrate interceptions in operational scenarios.

Hundreds of millions of shekels have been allocated to the final development stages and trial phase, in which the system will be placed on the border with the Gaza Strip. It was not immediately clear when the initial deployment would begin.

According to the Defense Ministry, as long as there is a constant source of energy for the laser, there is no risk of ever running out of ammunition.

The downside of a laser system is that it does not function well in times of low visibility, including heavy cloud cover or other inclement weather. For that reason, the ministry intends to also mount the system on planes, which would help get around this limitation by putting the system above the clouds, though that is still a few more years off, ministry officials have said.

“We are now in a period of security stability, but we are strategically prepared, in all theaters, for every scenario,” Bennett said on Tuesday. 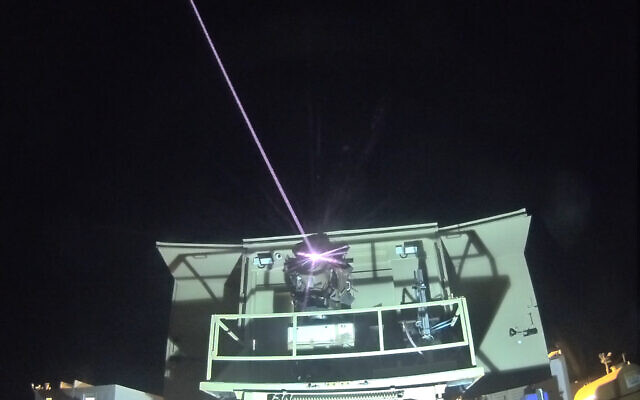 The Lebanese Hezbollah terror group is believed to maintain an arsenal of some 130,000 rockets, missiles, and mortar shells, which the military believes would be used against Israel in a future war.

The two largest terror groups in the Gaza Strip, Hamas and the Palestinian Islamic Jihad, are also each believed to possess thousands of rockets and mortar shells, even after firing upwards of 4,000 projectiles at Israel during last year’s 11-day war.

Israeli military officials have also said they have seen a growing trend in Iranian use of drone attacks in recent years, dubbing it Iran’s “UAV terror.”

Against these and other threats, Israel operates a multi-tiered air defense array, made up of the short-range Iron Dome, the medium-range David’s Sling, and the long-range Arrow and Patriot systems.