Stressing the close historical and cultural ties between Kyiv and Jerusalem, Ukrainian President Volodymyr Zelensky said Thursday that his country is disappointed by the level of material and diplomatic support it has received from the Israeli government.

“Unfortunately, for most items of assistance we would want to get from Israel, we can’t say we’ve gotten any of that assistance,” said Zelensky, speaking by video to students and faculty members at the Hebrew University of Jerusalem, a day before the four-month mark of the Russian invasion.

“Please remember how close we are linked, how our ties are, and what should be the level of understanding between us,” he continued, after referencing Zionist pioneers who grew up in Ukraine, including prime minister Golda Meir, author Sholem Aleichem and president Yitzhak Ben-Zvi.

“When governments introduce sanctions against Russia, this is not about business,” he stressed, wearing the khaki t-shirt with Ukrainian insignia that has become the preferred dress code for senior Ukrainian officials during the war. “This is about values and general security. This is about everyone who is willing to destroy another nation [having] to be held accountable. Unfortunately, we have not seen yet Israel join the sanctions regime.”

Since Russia invaded Ukraine on February 24, Jerusalem has tried to preserve its ties with Moscow and has until recently refused to send defensive equipment to Ukraine — instead sending over some 100 tons of humanitarian aid and setting up a field hospital in western Ukraine for six weeks.

In May, Israel shipped 2,000 helmets and 500 flak jackets that the Defense Ministry said would be given to rescue forces and civilian organizations. It has not sent Iron Dome batteries despite repeated public requests, and Kyiv has recently begun openly criticizing Israel for not agreeing to rehabilitate significant numbers of wounded Ukrainian soldiers. 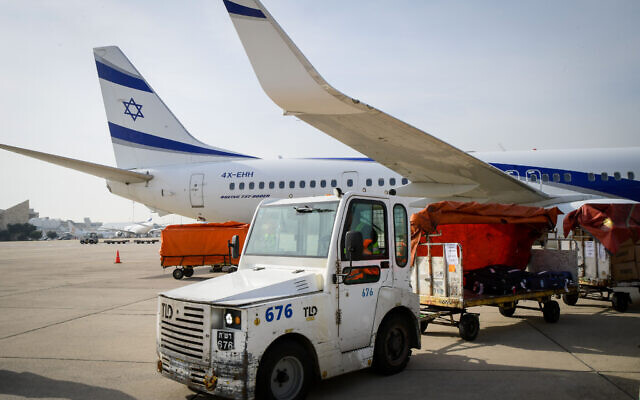 “Why we have misunderstandings, miscommunication with representatives of the government, I don’t know,” Zelensky lamented.

The Ukrainian leader contrasted Israel’s stance with that of small countries like Luxembourg, and other countries under Russian threat like Poland, both of whom have made significant defense contributions to Kyiv.

“We understand it is not a simple situation,” he allowed.

At the same time, Zelensky underscored his admiration and gratitude toward the Israeli people.

We will have to look into each others’ eyes for many years to come.

“I love your country,” he said. “I am grateful to the people of Israel. I am grateful to you for the sincere and emotional support for Ukraine, for your support of Ukrainians, I’m grateful for the Ukrainian flags on your streets. We see this and we value this very much.” 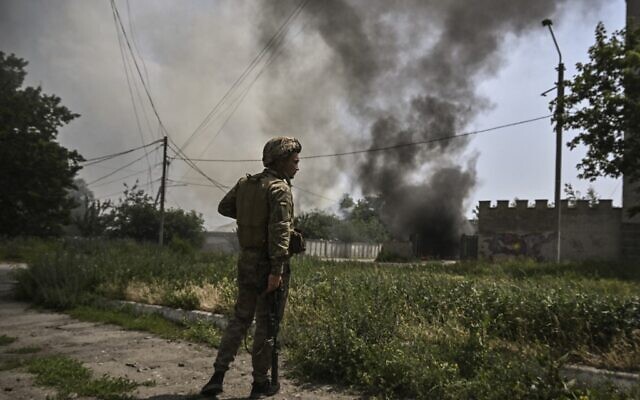 A Ukrainian serviceman stands in front of a burning vehicle during an artillery duel between Ukrainian and Russian troops in the city of Lysychansk, eastern Ukrainian region of Donbas, on June 11, 2022. (Aris Messinis/AFP)

“They are burning our cities, they are destroying everything in their way,” he said. “They are shooting people on the streets, torturing people, they are raping minors, boys and girls. They have created filtration camps where they torture people.”

After his address, Zelensky took questions from students, including some of the Ukrainian students who fled Kharkiv to study at Hebrew University. The leader showed his softer side as a nervous Ukrainian student struggled to get her question out.

“Forgive me, it’s the first time I’ve spoken to the president,” she said, to applause. Zelensky smiled and told her to take her time, and that it was fine to ask the question in Russian.

Zelensky ended by saying that he cares deeply about the future of Israel-Ukraine relations.

“We do have a joint future, a great future,” says Zelensky. “Because we have this great history and great past.”

“We will have to look into each others’ eyes for many years to come.”