Russian media is pumping out news reports that carry the false claim of eastern Ukraine being a hotbed of Nazism as way to convince the public that Russia’s invasion of its neighbor is justified, the New York Times reported Saturday.

Russian President Vladimir Putin has claimed that he sent troops into eastern Ukraine to combat a growing threat of Nazism in the region.

An examination of nearly eight million articles about Ukraine from 8,000 Russian websites since 2014 showed that reporting about Nazism in Ukraine was flat until February 24, the day of Russia’s invasion.

The analysis was provided to the Times by Semantic Visions, a defense analytics company. It included major Russian state media outlets and thousands of smaller websites and blogs.

Data showed that a consistent 10-20 percent of news articles about Ukraine have mentioned Nazism in the months since the invasion, compared to infrequent spikes before it started that topped at just 10%. 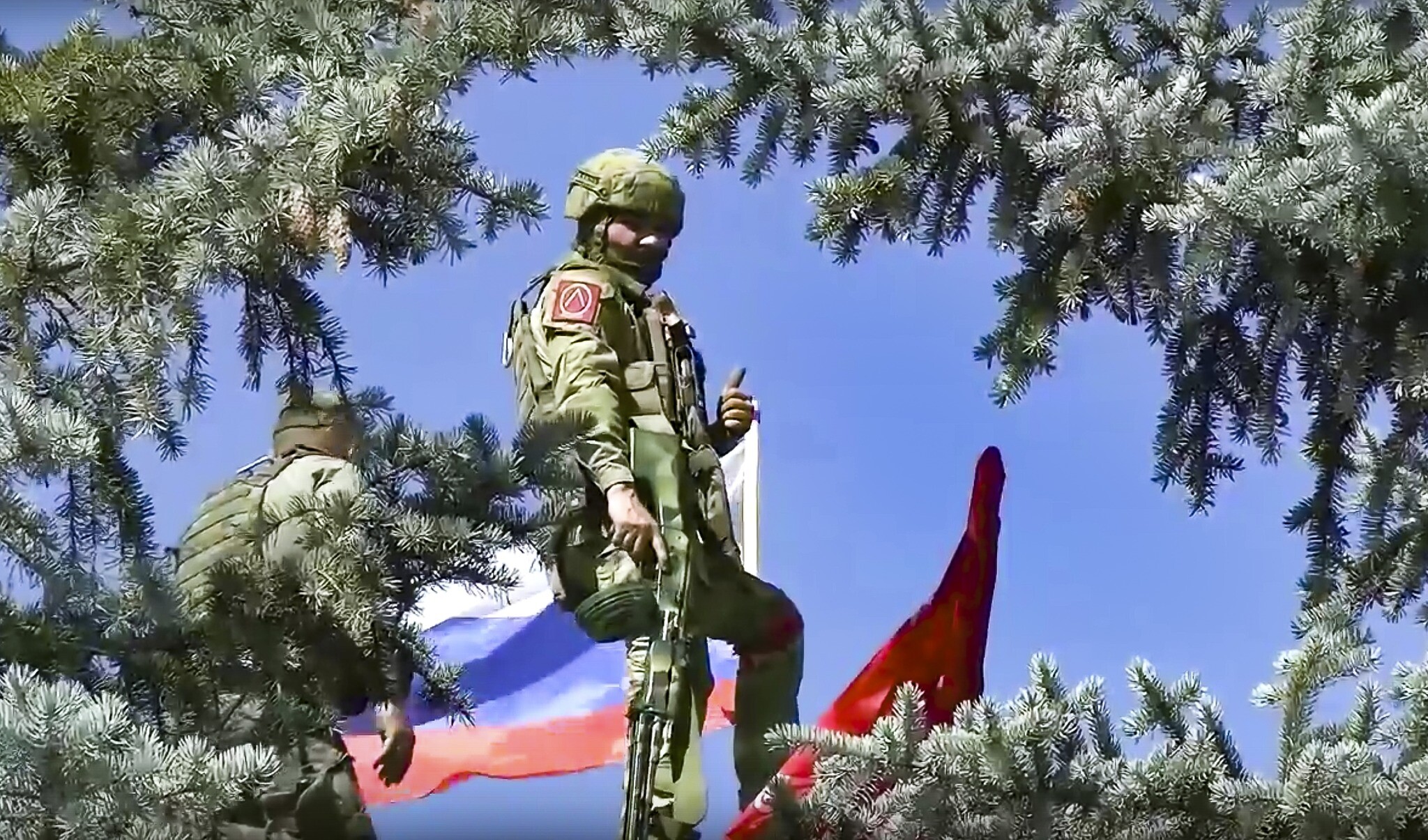 “It gives a view of Russia’s attempts to justify its attack on Ukraine and maintain domestic support for the ongoing war by falsely portraying Ukraine as being overrun by far-right extremists,” the newspaper said.

Among the false claims made in news stories are that Ukrainian Nazis are planning a genocide of Russians, killing Ukrainian civilians and using noncombatants as human shields.

There has been a similar jump in Russian-language references to Nazism on social media, according to Zignal Labs.

The claim that eastern Ukraine is corrupted by Nazis has been rejected by Western experts. It has also been criticized by the Anti-Defamation League and the US Holocaust Memorial Museum. 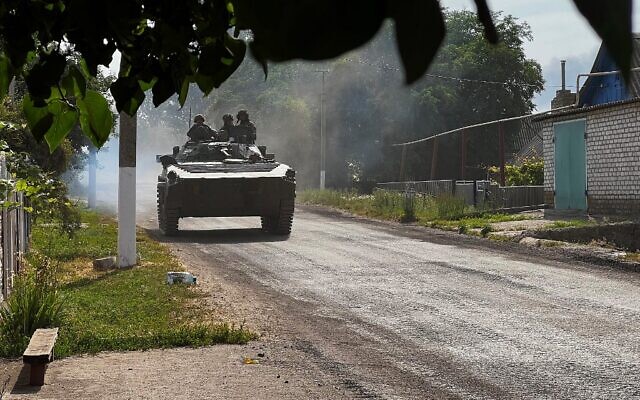 Ukrainian soldiers ride an armored vehicle on the main road to Lysychansk in Ukraine’s eastern region of Donbas on June 26, 2022. (Bagus Saragih/AFP)

Ukraine’s President Volodymyr Zelensky is Jewish and was elected with 73% of the vote in 2019. All far-right parties together won only 2% of the vote, lower than the threshold needed to enter parliaments, according to the Times report.

Jeffrey Veidlinger, a professor of history and Judaic studies at the University of Michigan, explained that in Russia, Nazism is understood as the idea of Nazi Germany being the antithesis of the Soviet Union, rather than in the context of persecution of Jews.

“That’s why they can call a state that has a Jewish president a Nazi state and it doesn’t seem all that discordant to them,” he said. 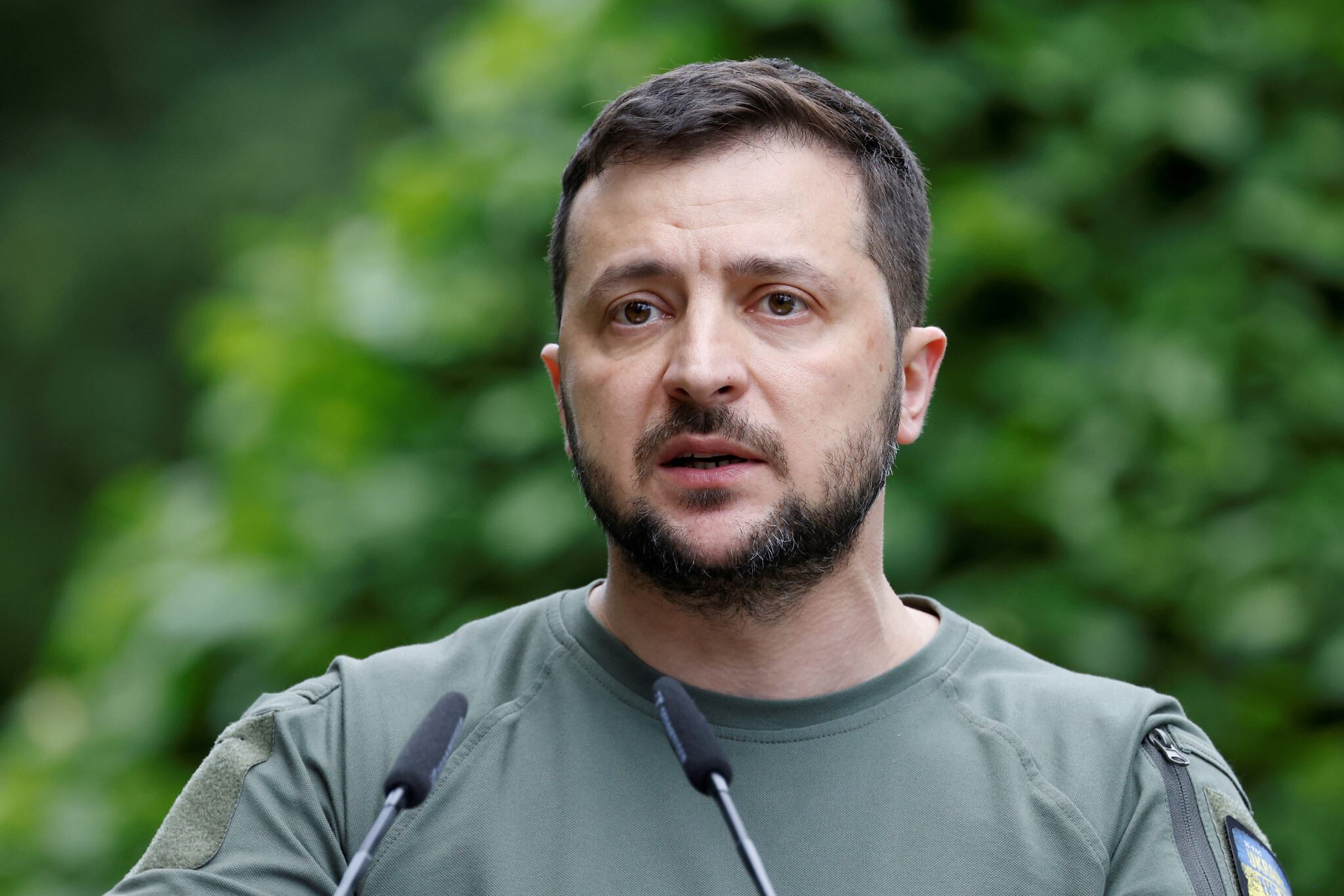 “You see it on Russian chat groups and in comments Russians are making in newspaper articles,” Veidlinger said. “I think many Russians actually believe this is a war against Nazism.”

Making the defeat of Nazism an element of the invasion helps Russians to digest the war, noted Larissa Doroshenko, a researcher at Northeastern University who studies disinformation.

“It helps to create this dichotomy of black and white — Nazis are bad, we are good, so we have the moral right,” Doroshenko.

The history of Ukrainian collaboration with the Nazis during World War II makes it easier to sell the idea that Nazism is still rife, experts said.

“The current Ukrainian state is not a Nazi state by any stretch of the imagination,” Veidlinger said. “I would argue that what Putin is actually afraid of is the spread of democracy and pluralism from Ukraine to Russia. But he knows that the accusation of Nazism is going to unite his population.”

Russia’s attempts to justify its invasion as a campaign against Nazism led to a diplomatic spat with Israel in May.

At the time, Russian Foreign Minister Sergey Lavrov said that “Hitler also had Jewish blood” and that “some of the worst antisemites are Jews.” 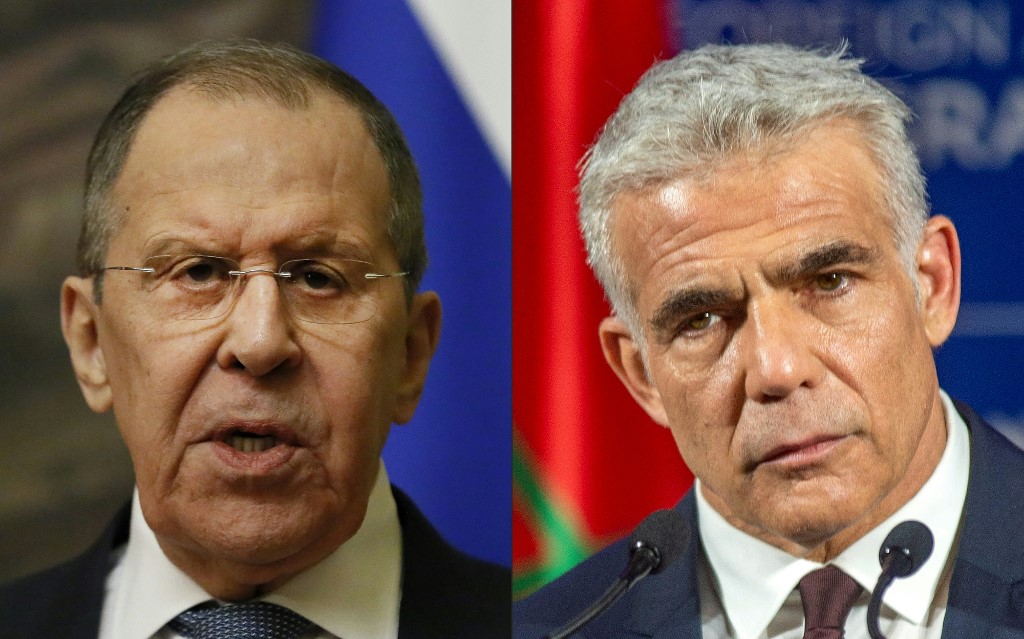 Lavrov made the remarks in an interview with an Italian news outlet while attempting to justify the oft-repeated Russian talking point that it invaded Ukraine in an effort to “de-Nazify” the country.

His ministry followed up days later in a statement that  accused Israel’s then-foreign minister Yair Lapid of making “anti-historical statements” that “largely explain why the current Israeli government supports the neo-Nazi regime in Kyiv.”

The Russian Foreign Ministry claimed that while during the Holocaust “some Jews were forced to participate in crimes,” Zelensky “does this quite consciously and quite voluntarily.” The statement also claimed that Ukraine is currently home to “the most extreme antisemitism.”

The Russian ambassador to Israel was summoned by Israel’s Foreign Ministry to discuss Lavrov’s remarks and Lapid called on the Russian government to apologize to Jews and to Holocaust victims.

Jerusalem’s ties with Moscow have deteriorated in recent months with Israel’s increasing support for Ukraine.