Interior Minister Ayelet Shaked on Wednesday said she was open to joining a government led by opposition leader Benjamin Netanyahu in the current Knesset, as the ruling factions race to disperse the Knesset and block its rivals’ efforts to assemble a coalition.

The opposition could potentially form a new government without heading to elections if it manages to gain the support of a majority of members in the 120-seat Knesset. They would have to be successful before the bill dispersing parliament passes all the necessary legislative hurdles, which may happen as early as Monday.

The chances of Shaked aiding Netanyahu’s efforts are viewed as low, as she would need to step down as interior minister to regain her Knesset seat.

Shaked resigned from the Knesset last year under the “Norweigan Law” to allow another Yamina party member to become a lawmaker while she served as a minister.

He accused Shaked of “keeping eye contact” with Netanyahu’s base over the past year and sabotaging efforts to pass a bill barring MKs on trial for serious crimes with forming a government, which would prevent the former prime minister from regaining the premiership.

Meanwhile, Netanyahu was photographed Wednesday in the Knesset plenum reading a message from his son Yair claiming that Shaked’s move could be a ruse aimed at convincing the opposition to hold off on supporting the Knesset’s dispersal, thus giving the coalition more time to pass the bill that would block Netanyahu from assembling a coalition.

It was unclear what was the basis for Yair Netanyahu’s claim as Shaked, who is seen as a bete noire of the ex-premier’s, has previously come out against the bill. 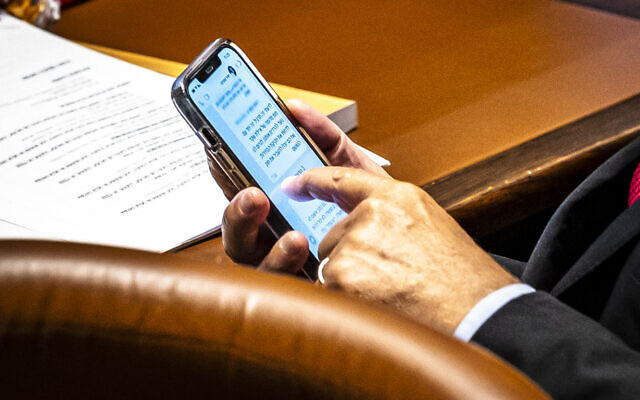 Opposition Leader Benjamin Netanyahu looks at a message from his son Yair during a discussion and a vote on a bill to dissolve the Knesset, at the Knesset plenum in Jerusalem, June 22, 2022. (Olivier Fitoussi/Flash90)

Defense Minister Benny Gantz and Justice Minister Gideon Sa’ar have both said there is no chance they will sit with Netanyahu again.

After the first cracks in the ruling coalition appeared in April, Shaked reportedly held talks with the Likud on joining the faction, but apparently rejected an ultimatum that she had two hours to decide on her course.

Netanyahu and Shaked’s relationship has soured since their first political partnership in the mid-2000s, when the latter headed then-opposition leader Netanyahu’s office.

Netanyahu’s wife Sara reportedly blocked Shaked’s efforts to return to Likud after her and Prime Minister Naftali Bennett’s New Right party failed to pick up enough votes to enter the Knesset in the April 2019 elections.