According to the Yesh Din rights group, some 60 settlers from Adei Ad assaulted Palestinian workers some two kilometers away, near the village of Mughayir.

It said the settlers “physically assaulted the workers in a very violent way,” injuring two. The Kan public broadcaster said one of the wounded was an Israeli citizen.

According to the network, the incident began after the settlers hurled stones at the workers. A little later, a violent brawl broke out between dozens of Israelis and Palestinians.

A pair of vehicles belonging to the Palestinian workers were torched, images showed. Yesh Din said an excavator was also damaged.

There was no immediate comment from Israeli authorities on the incident. 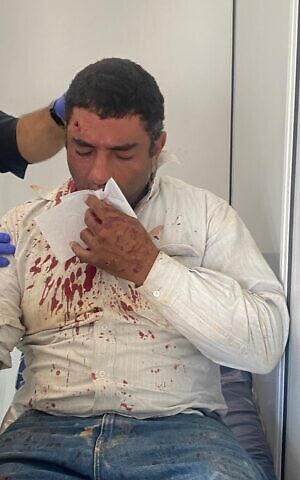 A Palestinian man who was allegedly assaulted by settlers near the West Bank village of Mughayir, June 25, 2022. (Mughayir Council via Yesh Din)

The alleged assault came days after a Palestinian man was stabbed to death in the northern West Bank, allegedly by an Israeli man.

Palestinian witnesses said Ali Hassan Harb, a 27-year-old engineer, was stabbed in the heart by a settler on the outskirts of his hometown of Iskaka late on Tuesday afternoon. A group of Israelis had arrived in the area with construction materials in an apparent attempt to build a new illegal outpost.

Israeli police arrested an Israeli settler in his 40s on Wednesday for alleged involvement in an incident. He was held as an accomplice and not on suspicion of carrying out the stabbing himself, according to Kan.

There has been a rise in settler violence in recent years, and soldiers are sometimes seen standing by as they occur. Soldiers are legally permitted — even required in some cases — to intervene to prevent violent attacks, regardless of nationality. The military generally prefers that police deal with the attacks and settler arrests, but police do not have as much of a presence in the West Bank.

In October, Defense Minister Benny Gantz issued a statement urging the military to act “systemically, aggressively and uncompromisingly” against settler violence directed toward Palestinians, activists and security forces, who have also occasionally come into the crosshairs. However, no apparent crackdown has followed.