SOLEDAR, Ukraine (AFP) — Ukraine marked 100 days since Russia’s invasion on Friday with fighting raging across the east of the country, where Moscow’s forces are tightening their grip on the Donbas region.

The somber milestone came as Kyiv announced Moscow was now in control of a fifth of Ukrainian territory, including Crimea and parts of Donbas seized in 2014.

After being repelled from around the capital, Russian President Vladimir Putin’s troops have set their sights on capturing eastern Ukraine, prompting warnings the war could drag on.

Some of the fiercest fighting is now centered on Severodonetsk in the Donbas region, 80 percent of which the Russians have seized, but Ukrainian forces are putting up stiff resistance.

President Volodymyr Zelensky said late Thursday that Ukrainian forces had had some success in the battle for the industrial hub, which is in the Luhansk region.

“But it is still too early. It is the toughest area at the moment,” he added. 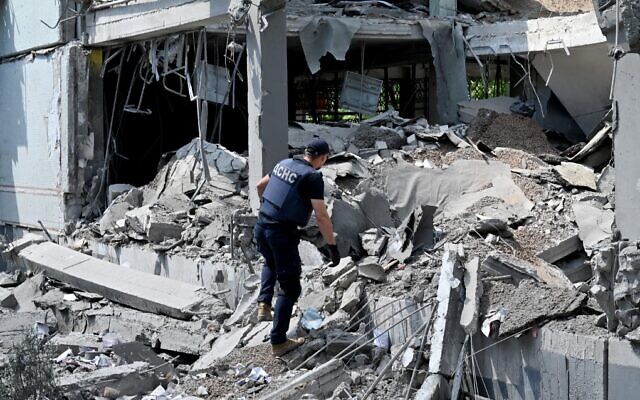 A rescuer walks among the ruins of a school in Kharkiv, partially destroyed by a rocket on June 2, 2022, as Russian forces solidify their hold on the eastern Donbas region. (Sergey Bobok/AFP)

Luhansk regional governor Sergiy Gaiday said on Telegram that “for 100 days, they have been leveling everything,” accusing the Russians of destroying hospitals, schools and roads.

“But we are only getting stronger. Hatred of the enemy and faith in our victory make us unbreakable.”

Since Russia’s February 24 invasion, thousands of people have been killed and millions forced to flee, while Zelensky says up to 100 Ukrainian soldiers are dying every day on the battlefield.

Severodonetsk’s Azot factory, one of Europe’s biggest chemical plants, was targeted by Russian soldiers who fired on one of its administrative buildings and a warehouse where methanol was stored.

Ukrainian troops were still holding an industrial zone, Gaiday said, a situation reminiscent of Mariupol, where a huge steelworks was the southeastern port city’s last holdout until Ukrainian troops finally surrendered in late May.

About 60% of infrastructure and housing had been destroyed, while internet, mobile network and gas services had been knocked out, said the city’s mayor Oleksandr Zaika.

“The shelling is getting stronger every day,” he said. 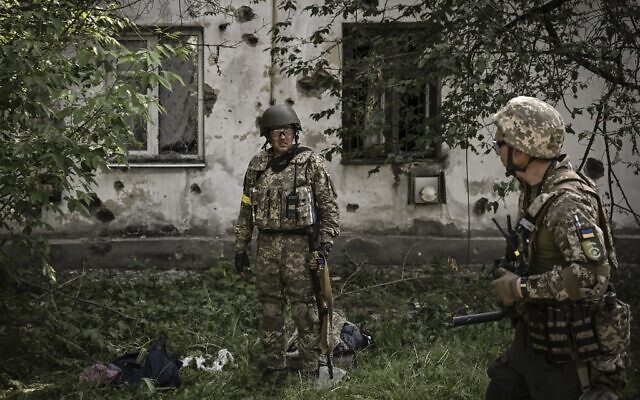 Ukrainian servicemen stand in the city of Lysytsansk in the eastern Ukrainian region of Donbas on May 30, 2022, amid the Russian invasion of Ukraine. (Aris Messinis/AFP)

In the city of Sloviansk, about 80 kilometers (50 miles) from Severodonetsk, residents said there were constant bombardments by Russian troops.

“It’s very difficult here,” said paramedic Ekaterina Perednenko, 24, who only returned to the city five days ago but realizes that she will have to leave again.

“Shooting is everywhere, it’s scary. No water, electricity or gas,” she said.

And in Mykolaiv in the south, Russian shelling killed at least one person and injured several others, Ukrainian military officials said late Thursday.

Led by the United States, Western nations have pumped arms and military supplies into Ukraine to help it survive the onslaught.

Bridget Brink, the new US ambassador to Kyiv, promised Thursday that the United States would “help Ukraine prevail against Russian aggression,” after presenting her credentials to Zelensky.

Earlier this week, the United States announced that it was sending more advanced Himar multiple rocket launch systems to Ukraine.

The mobile units can simultaneously fire multiple precision-guided munitions at targets up to 80 kilometers away.

They are the centerpiece of a $700 million package that also includes air-surveillance radar, ammunition, helicopters and vehicles. 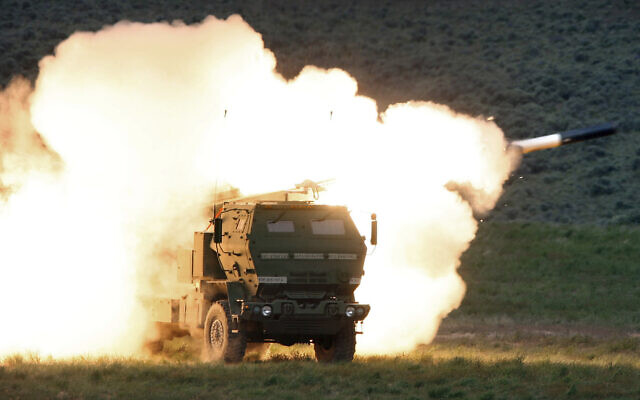 In this May 23, 2011, file photo a launch truck fires the High Mobility Artillery Rocket System (HIMARS) produced by Lockheed Martin during combat training in the high desert of the Yakima Training Center, Wash. (Tony Overman/The Olympian via AP, File)

Kremlin spokesman Dmitry Peskov accused Washington of “adding fuel to the fire,” although US officials insist Ukraine has promised not to use them to strike inside Russia.

Beyond sending arms to Ukraine, Western allies have also sought to choke off Russia’s financial lifeline in a bid to get Putin to change course.

Ramping up an already long list of embargoes, the United States blacklisted Putin’s money manager and a Monaco company that provides luxury yachts to Moscow’s elite.

Across the Atlantic, EU nations agreed on new sanctions that would halt 90% of Russian oil imports to the bloc by the end of the year.

Russia warned that European consumers would be the first to pay the price for the partial oil embargo.

Major crude producers agreed to boost output by about 50% a month in an effort to calm an overheated market and ease pressure on inflation.

But the move disappointed investors, and prices rose following the announcement.

The war risks triggering a global food crisis, as Ukraine is one of the world’s top grain producers.

It was already translating into higher costs for essentials from cereals to sunflower oil to maize, with the poorest among the hardest hit. 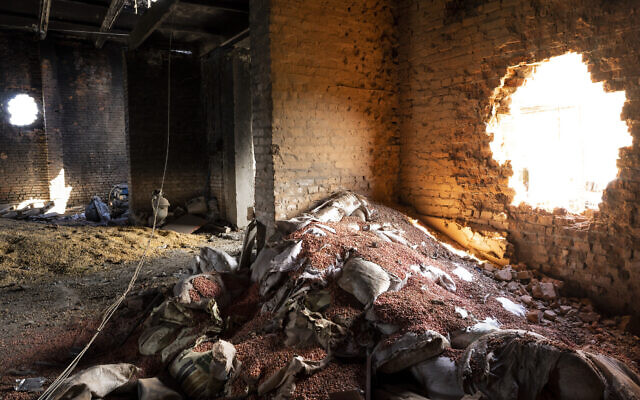 The head of the African Union, Senegalese President Macky Sall, is to visit Russia on Friday for talks with Putin.

The visit is aimed at “freeing up stocks of cereals and fertilizers, the blockage of which particularly affects African countries,” along with easing the Ukraine conflict, Sall’s office said.