The overall outcome would effectively replicate the current stalemate in the Knesset though, with neither the opposition nor the government led by Prime Minister Naftali Bennett earning a parliamentary majority. The coalition has counted 60 MKs as members since a lawmaker from the premier’s Yamina party quit the coalition last April. Since then, several other coalition members have voted against legislation sponsored by their own bloc, giving off a growing perception that they are unable to govern.

According to the survey aired by the Kan public broadcaster on Tuesday, Netanyahu’s Likud party would once again be the largest in the Knesset with 35 seats followed by Foreign Minister Yair Lapid’s centrist Yesh Atid with 20.

The far-right Religious Zionism party was forecasted as the third-largest party with 10 seats, while the ultra-Orthodox Shas faction and the coalition’s centrist Blue and White party each would pick up eight seats.

The poll gave both the Haredi ultra-Orthodox UTJ and the center-left Labor party seven seats, with Bennett’s right-wing Yamina and the predominantly Arab Joint List getting six seats apiece.

Finance Minister Avigdor Liberman’s right-wing secularist Yisrael Beytenu would fall from seven to five seats, according to the survey, which predicted that the coalition’s Islamist Ra’am party and left-wing Meretz faction would each win four seats — a net loss of two for the latter slate. 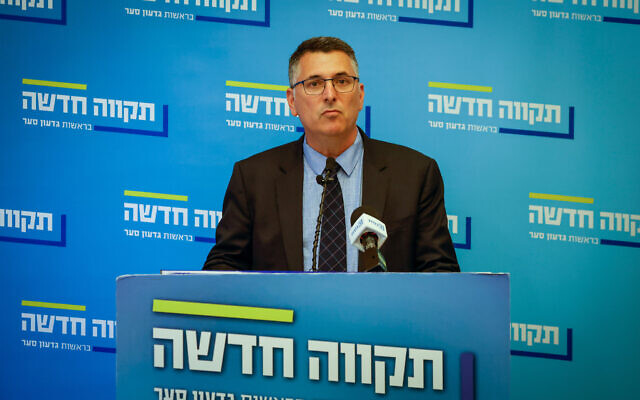 Altogether, the parties that currently make up the government — minus New Hope — would have 54 seats; Netanyahu’s Likud and its partners would have 60, while the unallied Joint List would have six. Without a majority, Netanyahu would be unable to replace Bennett as prime minister, potentially prolonging the Knesset gridlock.

The results indicated slight improvements for both blocs, compared to a poll from May, which put the coalition at 53 seats and the Netanyahu-bloc at 59 seats. The Joint List performed better in that survey, receiving eight seats.

Tuesday’s survey was conducted by Kantar Insights, included 552 respondents and had a 4.4% margin of error.

The poll was conducted a day after the Knesset voted down legislation championed by Sa’ar to renew a measure extending Israeli laws to settlers in the West Bank. The New Hope leader warned beforehand that failure to pass the law put the longevity of the coalition at risk.

Respondents were asked about the decision by right-wing opposition parties to vote against legislation extending Israeli law to settlers in order to embarrass the government. Forty-seven percent of Likud voters and 45% of Religious Zionism voters were supportive of the decision.