“We just have to be prepared for the long haul,” the secretary-general told reporters. “Because what we see is that this war has now become a war of attrition.”

Stoltenberg said Ukrainians are “paying a high price for defending their own country on the battlefield, but also we see that Russia is taking high casualties.”

While reiterating that NATO does not want to enter a direct confrontation with Russia, Stoltenberg said the Western military alliance has a “responsibility” to support Ukraine.

Asked if Ukraine was being pressured by the West to accept losses of territory in order to negotiate peace, Stoltenberg said “it’s not for us to decide or to have strong opinions [on] what Ukraine should accept or not accept.” 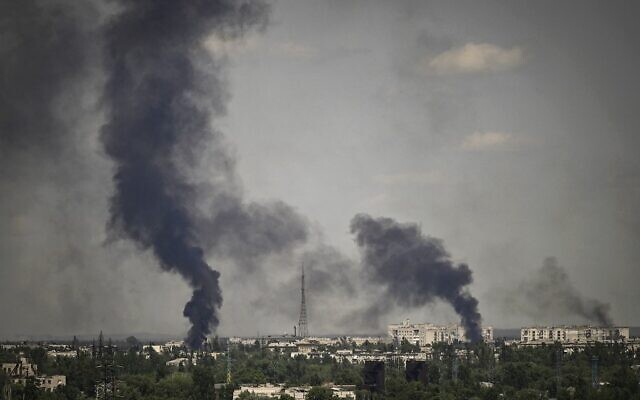 Smoke and dirt rise from the city of Severodonetsk, during shelling in the eastern Ukrainian region of Donbas, on May 30 2022, amid Russia’s military invasion launched on Ukraine. (Aris Messinis/AFP)

The NATO chief would not comment on whether the alliance was discussing naval escorts to get grain exports blocked in Ukraine out through a Russian blockade of the Ukrainian coast, but said he welcomed efforts to find solutions.

“The easiest way to get more grain out and to reduce the pressure on food prices is for President Putin to end the war,” he said. “As long as that’s not the case, I welcome the effort by different countries, including NATO allies, also in close coordination with the UN, to look for ways to get more grain out.”

This includes efforts to expand land export routes under Ukraine’s control “but also the possibility of getting some grain out by ship.”

“I welcome those efforts,” he said.