The Environmental Protection Ministry warned drinks manufacturers and importers on Tuesday that they are not fulfilling their obligations to promptly collect bottles for recycling.

Under the Bottle Deposit Law, manufacturers and importers are obliged to collect at least 77% of beverage containers marketed and 90% of those collected “within a reasonable time,” recycle them and provide detailed reports to the government.

Those who fail are fined. They must also return deposits paid by consumers when the bottles were purchased at stores.

The Ministry said it was preparing instructions on the frequency with which the containers should be picked up. 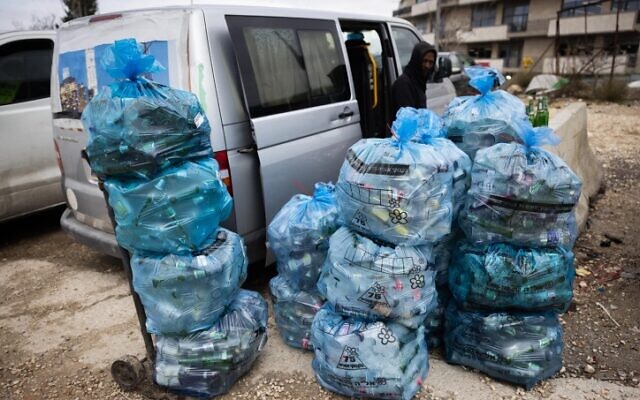 Since 2001, when the government passed the Deposit Law on Beverage Containers, a refundable sum — currently NIS 30 agorot ($0.09) — has been added to the cost of all cans of drinks, and glass and plastic bottles containing 100 milliliters (3.4 fluid ounces) to 1.5 liters (1.6 quarts) of beverage, to encourage people to return them after use.

An amendment to expand the law to containers of between 1.5 and 5 liters (1.6 to 5.3 quarts) came into effect on December 1.

The law allows consumers to return up to 50 beverage containers at a time to any store measuring more than 28 square meters (300 square feet) and to get a cash refund, or, if the customer chooses, a voucher.

Smaller stores must return the money on bottles bought on their premises.

Stores are obliged by law to pay a refund to a container that is properly marked, even if a reverse vending machine that is supposed to accept it has rejected it.

Bottles and cans without the requisite deposit stamp should be thrown into orange recycling bins meant for containers and packaging. 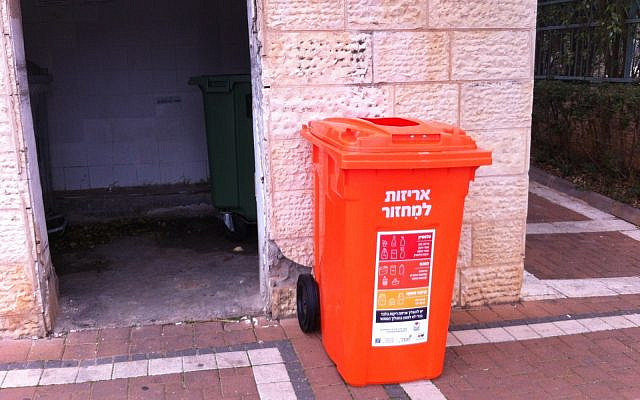 An orange recycling bin, with a sign setting out the types of containers that can be deposited. (Courtesy Tamir Recycling Corporation)

In Jerusalem, where the bins are set to be introduced in August, according to a municipality statement, they should be placed in the general refuse bins, which are green. They will be sorted further down the line.

During January and February, more than a thousand Israelis complained to the Environmental Protection Ministry about stores refusing to honor the expanded bottle deposit program.

On Monday, the ministry launched a second round of TV advertisements in Hebrew and Arabic encouraging the public to recycle.

The Hebrew commercial is headed by the Israeli actress Niv Sultan, star of the Apple TV+ series, Tehran.