Tel Aviv District Court on Wednesday sentenced a man to 15 months in prison for participating in a mob attack on an Arab motorist in the central coastal city of Bat Yam during a period of inter-community violence last year.

The Tel Aviv District Court also gave Yaakov Cohen an eight-month suspended sentence and ordered him to pay NIS 5,000 (around $1,450) in compensation to the victim, Saeed Mousa. Cohen has been in custody for 13 months, which will be considered time served.

Cohen, 32, was convicted in April of inflicting serious bodily injury under a plea bargain.

Prosecutors intend to appeal the sentence, according to the Ynet news site. A conviction for inflicting serious bodily harm can carry up to 14 years in prison.

The incident took place in May, when a mob yanked Mousa from his car and proceeded to beat him in an assault that left him motionless and bloodied on the ground, and seriously injured.

Cohen is alleged to have struck Mousa’s car and kicked him after he was pulled out of the vehicle by the crowd.

The prosecution accepted Cohen’s argument that he had thought the mob attacked Moussa because he was a terrorist. In return, any references to racist motives were dropped from his case.

He is the second person to be convicted in the case; several others have been charged. 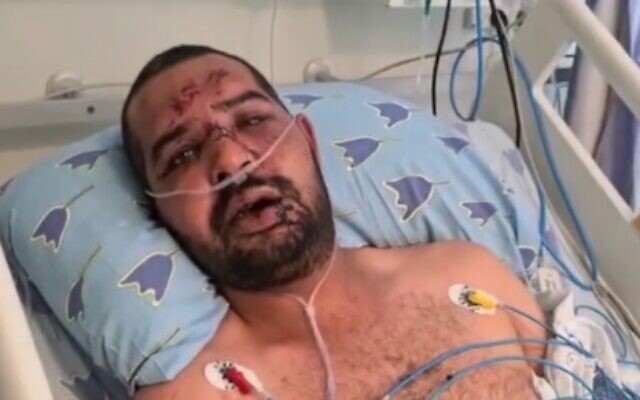 Saeed Mousa, an Arab Israeli who was assaulted by a Jewish Israeli mob, at Ichilov Medical Center, May 14, 2021. (video screenshot)

In January, Lahav Nagauker was sentenced to one year in prison for his involvement in the attack. Nagauker, who was 20 at the time, was convicted earlier of incitement to violence and racism as part of a plea deal that resulted in lighter charges.

The court said Nagauker was not involved in the actual attack, but threw a bottle at Moussa’s car, damaging the rear windshield. The State Attorney’s Office appealed to the Supreme Court over his sentencing, arguing it was too lenient.

The beating, which took place in the Tel Aviv suburb of Bat Yam, occurred while Israel was at war with the Hamas terror group in the Gaza Strip. The 11-day war ignited an unprecedented wave of internecine Jewish-Arab violence in cities around the country.

At least 10 people have been charged in the incident. In all, hundreds of people, most of them Arabs, were arrested for the nationwide violence, which saw mobs of Jews and Arabs vandalize property and violently clash, in some cases resulting in deaths.

Two juvenile defendants whose names are barred from publication admitted in plea agreements to assaulting Moussa.

The unprovoked beating of the motorist was caught on live television, shocking the public.

Mousa was on his way to the beach in Bat Yam when he was set upon by a group that had gathered to attack Arabs and Arab-owned businesses in the Tel Aviv-area city, according to an indictment filed in the case.

According to prosecutors, Mousa attempted to reverse away from the mob, but hit a car behind him. He then accelerated forward, with people jumping out of the way, before crashing into another car.

He was then dragged out of the car by the mob, with some claiming he had attempted to run over pedestrians, and was beaten badly. He was taken to Ichilov Hospital in serious condition, and his health has improved since.