The Knesset passed a bill Wednesday to formalize the status of bereaved siblings and ensure they are properly afforded their rights, with opposition MKs also supporting the legislation despite a pledge to always oppose any government bills.

The bill, presented by coalition MK Michal Shir, passed a preliminary reading with 72 votes in favor and zero against, amid reports that her New Hope party is in negotiations with opposition leader Benjamin Netanyahu’s Likud to form a replacement government. The leader of New Hope, Justice Minister Gideon Sa’ar, strongly denied Wednesday that he has held talks on the matter.

Amid the raucous plenum vote on the bill, Deputy Knesset Speaker Ahmad Tibi ejected several right-wing MKs from the plenum after one of them accused Arab lawmakers of backing terrorists.

Addressing Shir from the podium, MK Orit Strock of the far-right Religious Zionism party said “because of your friends in the coalition how many more bereaved siblings there are from more and more attacks,” referring to the coalition’s Islamist Ra’am party.

Tibi interjected to ask if she was accusing Arab lawmakers of committing terror, which she confirmed.

“I cannot accept the accusation of murder against Arab Knesset members,” said Tibi of the opposition Joint List, a predominantly Arab faction.

“This is a very serious statement, you accuse Arab MKs of being responsible for the murder and killing, you are blaming MKs in this House,” he added, noting the time allotted for her to speak had elapsed and asked that she be removed from the hall.

In the ensuing uproar, a number of opposition lawmakers came to Strock’s defense, shouting at Tibi, who then ordered that fellow Religious Zionism MKs Bezalel Smotrich and Simcha Rotman, as well as MK Itamar Ben Gvir of the extreme right-wing Otzma Yehudit party, also be ejected. 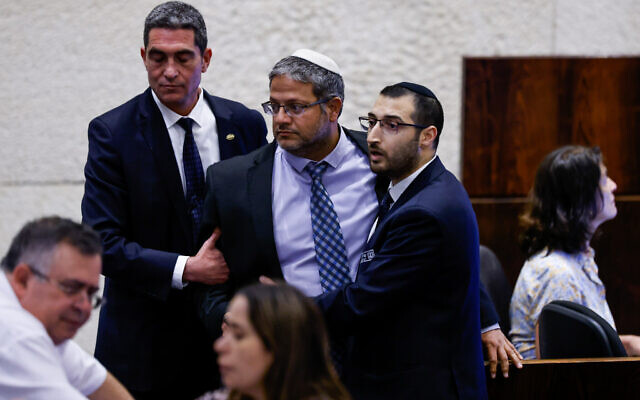 MK Itamar Ben-Gvir, center, is taken out by Knesset security guards during a discussion and a vote on the ‘Bereaved Siblings’ bill in the Knesset, in Jerusalem on June 1, 2022. (Olivier Fitoussi/Flash90)

Smotrich said afterward that Tibi’s continued role as deputy speaker “tramples on the remnants of the Knesset’s honor.”

Rotman called it a “disgrace to the Knesset” that Tibi was overseeing a discussion about the rights of bereaved families, accusing him of giving a “royal honor” to those who carried out the killings.

When Shir spoke, members of the opposition, including Likud, heckled her over the coalition’s inclusion of Ra’am. Shir, a former Likud member, responded:”Glad I left you guys, bunch of scum.”

The bill voted on Wednesday seeks to ensure bereaved siblings receive official notification and details about deaths of those serving in the security forces or from terror attacks, and also be provided information about the rights they are entitled to, as well as annual memorial ceremonies.

In presenting the bill, Shir noted that in some cases, family members have heard about the circumstances of death through third parties. 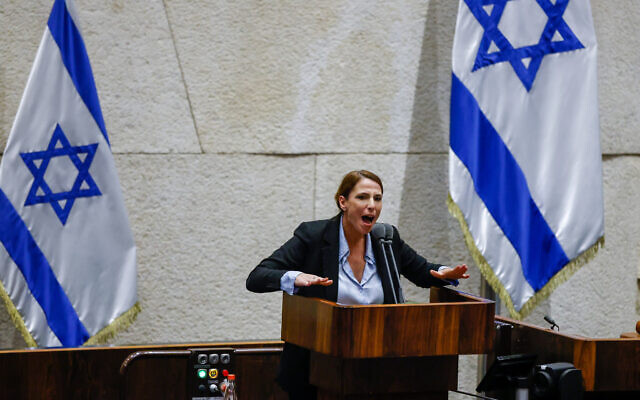 New Hope MK Michal Shir speaks during a discussion and vote on ‘Bereaved Siblings’ bill at the Knesset, in Jerusalem on June 1, 2022. (Olivier Fitoussi/Flash90)

Prime Minister Naftali Bennett leads a diverse coalition of eight parties from the left, center and right, along with Ra’am. Following defections to the opposition, the government has been left with only 60 seats in the 120-seat Knesset, equal to that of the opposition.

On Monday, right-wing and religious opposition party leaders said they will oppose all coalition bills as part of their commitment to bring down the government.

The assembled heads of the Likud, Shas, United Torah Judaism and Religious Zionism parties — who call themselves the “national camp” — said that their goal is to form an alternative government headed by Netanyahu from within the existing Knesset, and if not, to press for elections.

On Wednesday, Hebrew media reports said that Sa’ar, also a former Likud member who left to create New Hope, was holding covert talks with Likud on establishing an alternative government. They came as Sa’ar has drummed up tensions with other coalition members over a bill governing the legal status of West Bank settlers, warning that if it doesn’t pass the government cannot continue to exist.

In a round of media interviews with prime news networks later in the day, Sa’ar denied the reports that he is talking with Likud to replace the government.

Reminded that before last year’s elections he said he wouldn’t join a government led by Netanyahu and pressed to explicitly repeat that pledge, he told Channel 12, “my stance hasn’t changed.”