It took less than 24 hours for the Likud party to turn an interview with a former senior aide to ex-premier Naftali Bennett into fodder for a campaign spot, as stumping for votes got into full swing with elections exactly four months away.

A campaign video released Friday featured Shimrit Meir, a former diplomatic adviser to Bennett, in an interview to the Yedioth Ahronoth newspaper in which in which she spoke of the lengths the ex-premier and others in the coalition were prepared to go to win the cooperation of Arab political parties and keep his government afloat.

The video featured Likud leader Benjamin Netanyahu speaking in front of a quote displayed from Meir’s interview, in which she recalled tension in early May as the government waited to find out if the Islamist Ra’am would leave the coalition.

“Everyone was waiting for the Shura Council’s decision that night,” Meir recalled in the interview, referring to the clerical body involved in the decision making process for the party.

“Yair Lapid hysterically dispatched [his chief of staff] Na’ama Shultz to Kafr Qasim with an open checkbook,” she added, suggesting that the foreign minister-turned-premier was prepared to make far-reaching concessions to Ra’am in order for it to remain part of the coalition.

“Yair Lapid doesn’t have a government without the Joint List and the Muslim Brotherhood,” Netanyahu claimed, conflating Ra’am with its more extreme cousin, a tactic decried by some as a xenophobic dog whistle. “Therefore, he is prepared to pay them anything at your expense.”

“This is the decision in the upcoming election — between a Lapid government blackmailed by the Muslim Brotherhood and the Joint List, which will continue to harm our national honor and continue raising prices or a strong government led by myself that will return the strength, the pride and the hope to all citizens of Israel,” he said. 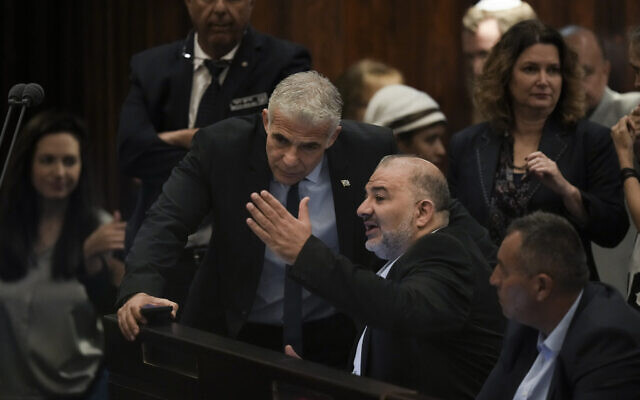 Netanyahu himself reportedly pledged to unleash millions in funding for Israel’s long-neglected Arab towns as he sought to convince Ra’am to join his coalition last year. Nonetheless, he has relentlessly disparaged the coalition for its reliance on the Arab political party, with some allies describing the party and its supporters as backers of terrorism. Ra’am chairman Mansour Abbas has on multiple occasions strongly condemned terrorism and has also said Israel has been and will remain a Jewish state.

Likud has since denied holding such negotiations with Ra’am but Abbas has threatened to release tapes and documents proving that they took place if Netanyahu continues to disparage the Islamist faction.

Meir was seen as one of Bennett’s closest aides whom he trusted with a number of prominent files, including relations with the US. But she sparred regularly with other senior staff members in the Prime Minister’s Office and resigned in May. And while Bennett may have entrusted her with some of the most sensitive matters in his office, the feeling evidently wasn’t mutual as she waited less than 24 hours from when Bennett stepped down from the premiership to drop several devastating critiques of his conduct while in office. 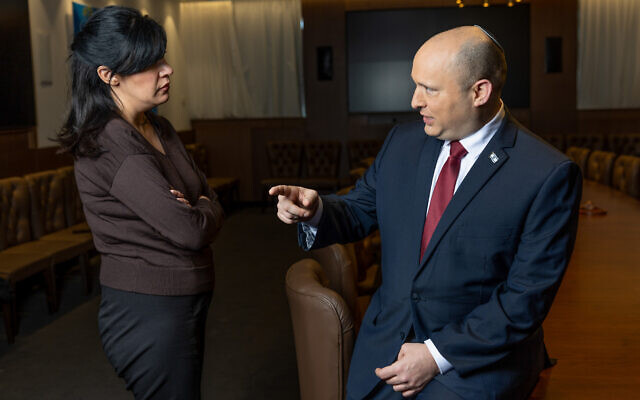 Her rivals within the PMO blamed her for pushing Bennett toward the political center, but Meir appeared to try and use the Yedioth interview to argue that she was the one trying to prevent the ex-premier from moving too far to the left.

“After the Passover holiday, I realized that the plan for the upcoming Knesset session was to rely on cooperation with the Joint List, namely Osama Saadi and Ahmad Tibi [from the Ta’al faction],” Meir said, adding that she warned Bennett that this would be a “grave mistake.”

After a preview of the interview was released on Thursday that included this passage, Bennett issued a statement adamantly denying any plan to rely on the Joint List. Still, he declined to hit back at Meir for the scathing interview, merely stating that she “did her job exceptionally well.”

Meir suggested that the coalition failed miserably in controlling its own members: “The political management was a failure from day one. Had my area of responsibility been managed like the political one, the Syrians would have already been on the fences [of the Israel border].” 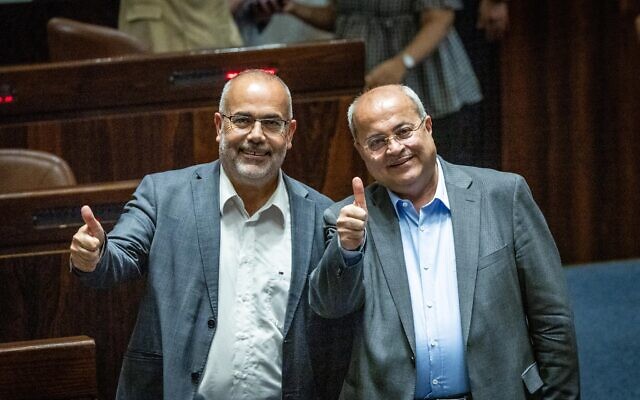 MKs Osama Saadi, left and Ahmad Tibi after a vote on their bill to raise the minimum wage, held at the Knesset, in Jerusalem on June 8, 2022. (Yonatan Sindel/Flash90)

She recounted that the moment where “everything started to go totally downhill” was when Yamina MK Idit Silman quit the coalition and other members of Bennett’s party began to “blackmail” the premier.

Meir still had a few words of praise for the outgoing prime minister, saying that “when he was good, he was the best.” She pointed specifically to the IDF’s laser air defense system unveiled in April after a series of successful tests, and following Bennett’s push to roll out the technology quicker. “He wanted the laser, so he drove everyone crazy with the laser — at night it was the laser, in the morning it was the laser.”

Meir claimed that Bennett’s relationship with Yamina No. 2 Ayelet Shaked — who was handed leadership of the party on Thursday — has been rocky for several years. She alleged that Shaked has no political base — “on the contrary, she scares away [voters]” — and that “for several months she threatened Bennett with an unloaded gun.”

Eventually, Meir said, she decided to resign because “I understood he wasn’t listening [to me]. He doesn’t want to hear. And I understood there was no method to the madness.”