Responding to a leading ultra-Orthodox rabbi who said government ministers are worse than the Nazis, Foreign Minister Yair Lapid noted Sunday that his grandfather was murdered in the Holocaust and his father nearly died in a ghetto.

Addressing Rabbi Meir Mazuz of the Kisse Rahamim Yeshiva in Bnei Brak, Lapid wrote on Twitter: “My only answer to your remarks is that I love all of the Jewish people and wish Rabbi Mazuz… a day of unity and love for Israel.”

Lapid’s father, Tommy, was born in Serbia but the family was captured by the Nazis and later sent to the Budapest Ghetto. Tommy’s father was killed in a concentration camp, but Tommy and his mother were saved by Raoul Wallenberg, the Swedish businessman who famously rescued thousands of Jews from the Nazis.

Tommy Lapid eventually moved to Israel where he became a noted journalist, playwright and government minister.

“I didn’t know that teaching the core curriculum, going out to work and doing army service is worse than the Nazis,” Liberman wrote, adding that in the Talmud it is written that the Second Temple in Jerusalem was destroyed because of “baseless” hatred among the Jewish people.

The ministers were responding to a video broadcast Saturday in which Mazuz was seen saying the government seeks to “choke Torah students” while “giving as much as possible to Arabs.”

“We have bad people. We’re waiting for them to pass from this world,” Mazuz said, mentioning Lapid and Liberman by name as well as “all their friends.” 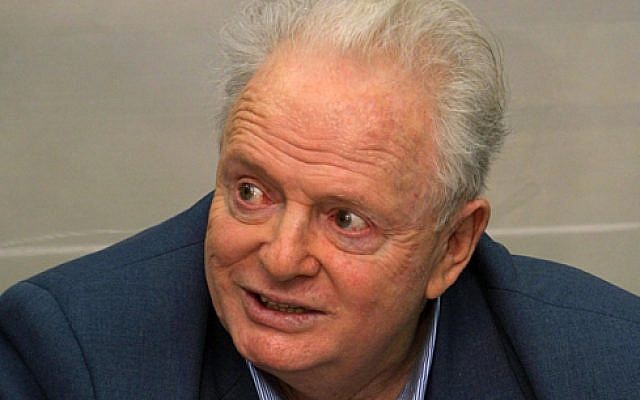 Lapid leads the Yesh Atid party and Liberman is head of Yisrael Beytenu, both movements that campaign for secular rights in Israel.

Mazuz is an influential Sephardic rabbi with ties to the ultra-Orthodox Shas party leadership. He was the spiritual leader of former Shas leader Eli Yishai’s short-lived Yachad party.

The rabbi has been at the center of controversy in the past.

In 2020, Mazuz drew condemnation when he said the arrival of the coronavirus pandemic in Israel was divine retribution for gay pride parades around the world. In 2016 he attributed the collapse of a Tel Aviv parking garage that killed six people to Shabbat desecration. 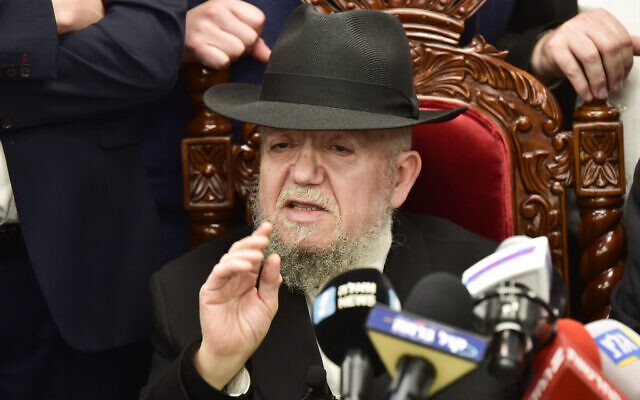 Israeli leaders have warned of growing hatred, division and incitement in society, particularly since the formation of the current coalition of disparate parties from left, right and center.

Lapid has said he’s received threats as well, including one message that expressed a wish he would die from cancer and likened him to Nazi leader Adolf Hitler.

In January a man was charged for threatening Religious Affairs Minister Matan Kahana that he would suffer the same fate as assassinated prime minister Yitzhak Rabin, over his plans to reform issues of state and religion, weakening ultra-Orthodox hegemony on various issues.

The formation of the unity government last year left the ultra-Orthodox, or Haredi, parties United Torah Judaism and Shas out of power for the first time in years. The parties have since attacked the secularist Liberman and Lapid, accusing them of acting out of hatred for their constituents.

The ministers insist they have no animosity toward the ultra-Orthodox population but do seek to end various social benefits that privilege Haredim over other groups. 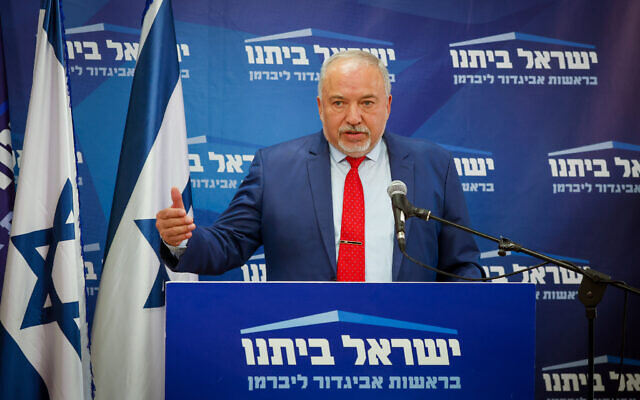 Finance Minister Avigdor Liberman speaks during a faction meeting of his Ysrael Beytenu party at the Knesset, in Jerusalem, on May 23, 2022. (Olivier Fitoussi/Flash90)

As the future of the coalition hangs in the balance, Channel 12 reported last week that Liberman was planning a wave of new economic cuts and measures that would affect the ultra-Orthodox community.

The report claims that Liberman is looking to advance three new measures: cutting the budget allocated to yeshiva studies by a third — from NIS 1.2 billion ($360 million) to NIS 800 million ($240 million); funding the private Haredi school system at 75% as opposed to 100%; and allocating benefits like daycare subsidies, rental assistance and arnona (property tax) discounts only to those who earn a certain level of income — cutting off those who study full time.

Of note is the purported attempt to intervene in daycare subsidies, an issue that Yamina MK Nir Orbach explicitly demanded remain untouched as part of an ultimatum for him to remain in the splintering coalition.

Initially, Liberman had pushed a plan under which, starting in 2023, subsidies for childcare would only be granted if parents work at least 24 hours a week. The move would have effectively ended subsidies for some 21,000 children, many of them from ultra-Orthodox families in which the father studies in yeshiva.

But after the pressure from Orbach last month, Liberman agreed to push off the cut until 2024.