Opposition leader Benjamin Netanyahu offered incoming Prime Minister Yair Lapid peace and quiet in his new post Friday, but also put the newly minted premier on notice that his political rivals won’t be the ones providing tranquility in the run-up to elections.

Netanyahu’s call to Lapid was the first publicly disclosed conversation between the two since the latter took over as prime minister hours earlier, tasked with stewarding the government ahead of elections after his eight-party coalition with Yamina leader Naftali Bennett collapsed after a little more than a year in power.

Netanyahu told Lapid he wished him “four months of security quiet,” ahead of elections scheduled for November 1, a spokesperson for the Likud leader said. Netanyahu, who was prime minister from 2009 to 2021, is attempting to return to power after a year of leading the opposition.

But during the conversation, the two split over how the opposition leader will receive updates on Israel’s security situations.

According to Netanyahu’s spokesperson, the opposition head told Lapid he wanted to get updates from his military secretary “in order to prevent the security briefing from turning into a political tool during elections.”

However, Lapid’s spokesperson said in a statement that Netanyahu was invited to “come as is accepted for a security briefing in [Lapid’s] office with the military secretary.” 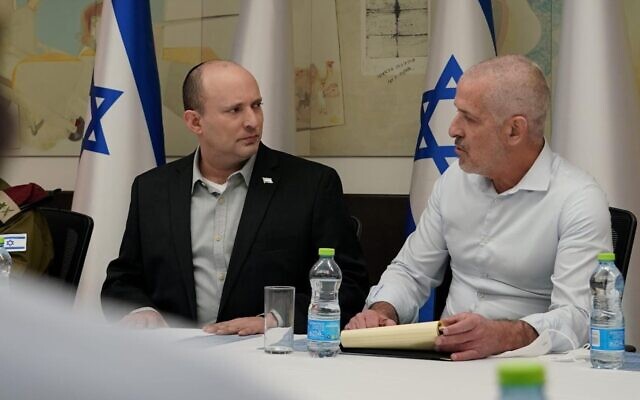 While the opposition leader is required by law to receive such updates from the prime minister, Netanyahu refused to comply over the past year, as he regularly argued against Naftali Bennett’s legitimacy as premier.

Instead, he received security updates from Bennett’s military secretary Avi Gil, managing to avoid being photographed while receiving a briefing from his political rival.

Lapid’s statements described Netanyahu’s call as congratulatory, though such language was not used according to his rival. 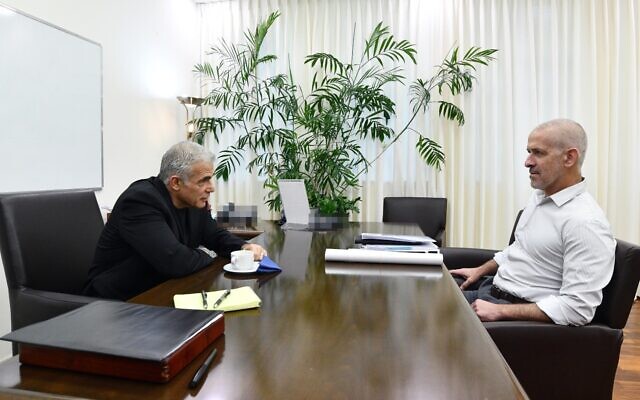 Lapid officially became prime minister at midnight between Thursday and Friday, taking office as the 14th premier in Israel’s history.

Later in the day, Lapid is expected to receive congratulatory phone calls from a range of world leaders, including US President Joe Biden, who is slated to touch down in Israel in less than two weeks. Lapid is also scheduled to make a brief trip on July 5 to Paris, where he will meet with French President Emmanuel Macron.

Only entering politics a decade ago, the centrist former TV anchor will be the first non-right-wing prime minister since Ehud Barak left office in 2001, and one of the few without significant military experience.

On Sunday, Lapid is expected to convene the first weekly cabinet meeting of his premiership. Bennett — who announced on Wednesday that he will not run in the next election — is set to remain in the government as alternate prime minister. He will also continue to hold responsibility for the country’s Iran policy.

Shortly afterward, the new prime minister held a meeting to discuss “the captives and MIAs” — a reference to the two Israeli men and the remains of two IDF soldiers being held by Hamas in the Gaza Strip.