As Israel braces for elections, Foreign Minister Yair Lapid on Wednesday traded barbs with a far-right lawmaker who he accused of pushing a racist and anti-democratic message.

Itamar Ben Gvir, who heads the extreme right Otzma Yehudit party, is known for visiting flashpoint locations such as the Temple Mount and Sheikh Jarrah neighborhood in Jerusalem, as well as his fiery confrontations with Arab Knesset members, particularly Joint List Ahmad Tibi, whom he has called a “terrorist.”

“The strongest person today in the opposition is not [Benjamin] Netanyahu, it’s Itamar Ben Gvir,” Lapid said in a swipe at the former prime minister.

“Ben Gvir’s message is simple and violent. He says no to a democratic state, no liberal values, no moderation, no rule of law, only nationalism and racism.”

Lapid made the comments while addressing the Eli Horovitz Conference on Economics and Society at the Israel Democracy Institute in Jerusalem.

Ben Gvir, who has recently enjoyed a bump in the polls, responded by claiming Lapid is a hypocrite, accusing MK Walid Taha of the coalition’s Islamist Ra’am party of wanting to “throw members of the LGBTQ community from roofs and murder IDF soldiers.” 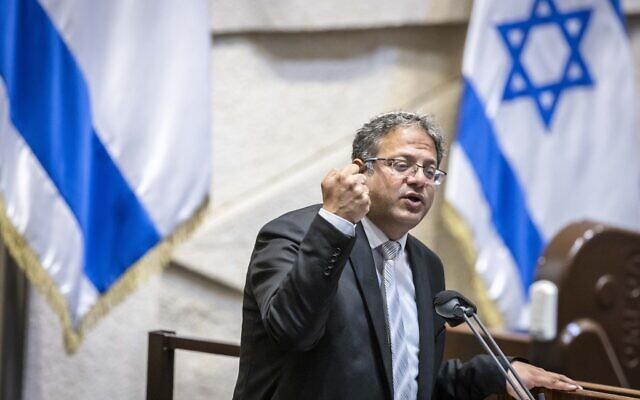 “He should be the last to preach,” Ben Gvir said. “The public is not stupid and will swap you for a right-wing government in the upcoming elections.”

Opposition lawmakers have regularly railed at the coalition’s inclusion of Ra’am, claiming its members are “terror supporters.”

The back and forth between Lapid and Ben Gvir came as the Knesset approved a preliminary reading of a bill on Wednesday to dissolve itself, setting the country on the path to its fifth round of elections since 2019.

After months of political instability triggered by the government’s loss of a parliamentary majority in early April and exacerbated by security tensions, Prime Minister Naftali Bennett and Lapid declared Monday that their efforts to stabilize their disparate coalition had been “exhausted.” They said they would therefore move to disband the Knesset and call new elections.

Following the Knesset’s expected dissolution, Lapid is due to assume the role of interim prime minister until a new government is sworn in after elections.

Also Wednesday, Justice Minister Gideon Sa’ar charged that the opposition was a threat to democracy while presenting a bill to the Knesset that would prevent a Knesset member under indictment from forming a government. 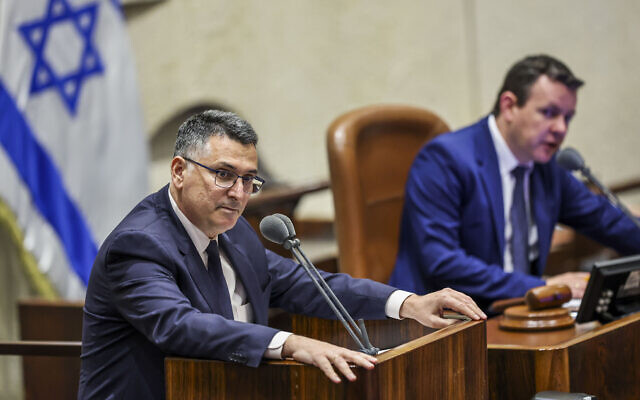 Justice Minister and New Hope party head Gideon Sa’ar leads a Knesset discussion and vote on a bill to extend the application of some Israeli laws to Israelis in the West Bank, June 6, 2022. (Yonatan Sindel/Flash90)

The bill would effectively bar Netanyahu, who is currently on trial for corruption charges, from regaining the premiership, though it appears highly unlikely to pass before the Knesset disperses.

“God forbid if this bloc wins a majority of 61 [seats] in democratic elections… basically there will be one authority in the State of Israel, more correctly, one head,” Sa’ar said.

He also accused Ben Gvir and United Torah Judaism MK Yitzhak Pindrus of wanting to “blow up the High Court of Justice,” referencing comments the latter made in May.

Right-wing lawmakers have for years accused the court of overstepping its mandate and encroaching on the legislature’s authority by striking down laws and other policies it deems unconstitutional.