Israeli police arrested an Israeli settler on Wednesday for alleged involvement in an incident in which a Palestinian man was stabbed to death the previous day in the northern West Bank.

The man, an Israeli settler in his 40s, was held as an accomplice and not on suspicion of carrying out the stabbing himself, according to the Kan public broadcaster.

Palestinian witnesses said Ali Hassan Harb, a 27-year-old engineer, was stabbed in the heart by a settler on the outskirts of his hometown of Iskaka late on Tuesday afternoon. A group of Israelis had arrived in the area with construction materials in an apparent attempt to build a new illegal outpost.

The detained Israeli’s lawyer said in a statement that his client had narrowly survived an assault by dozens of Palestinians.

“This was an event in which Jews were miraculously saved. This was a grave incident of Arabs attacking Jews,” said Adi Kedar, an attorney at Honenu, a right-wing legal aid organization that often represents Jews accused of hate crimes.

Israel Police said on Tuesday that the identity of the stabber was still unknown. Police declined to comment any further, citing a gag order barring “any details of the investigation” from being published.

But Harb’s death is also being investigated by both the Shin Bet security service and Israel Police’s Nationalist Crimes Unit in the Judea and Samaria Division, which often investigates Jewish extremist violence.

The incident took place in the late afternoon on Tuesday. According to Harb’s father Hassan, the family received word from a shepherd that Israeli settlers had arrived on their land, which lies near Ariel, in an attempt to set up the foundations of a new illegal outpost.

“I told my family, including Ali, and they went to try to stop it,” Hassan told The Times of Israel on Wednesday afternoon. 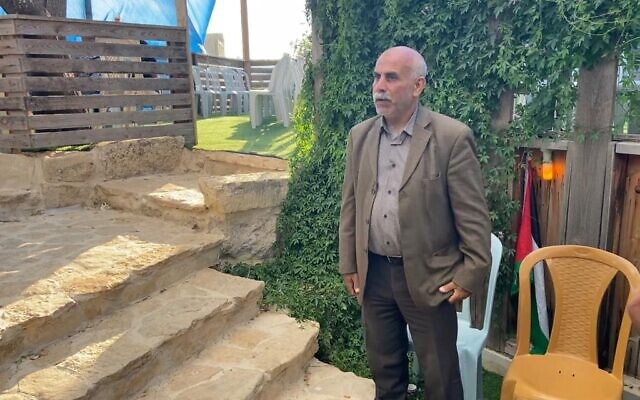 Hassan Harb, the father of Ali Harb, who was allegedly stabbed by an Israeli settler near the Israeli settlement of Ariel, welcomes mourners on June 22, 2022 (Aaron Boxerman/The Times of Israel)

“He stabbed Ali for no reason. Ali had only come to tell him to get off his land,” said Ramzi Harb, a relative who was present on the scene.

Most of the Israelis were young teenagers dressed in the style of hilltop youth — broad head coverings, religious prayer fringes hanging out. Four of them were adults, including the stabber, according to Ramzi.

The Israelis had brought building materials along with them and began taking measurements of the area, according to Palestinian witnesses. In footage from the scene, at least one of the Israeli teenagers can be seen carrying a shovel.

“No one goes hiking with a shovel. They were here to examine the land to see if they could build an outpost,” said Ahmad Harb, 24, Ali’s cousin.

According to Palestinians on the scene, the settlers fled when the Palestinians arrived, leaving behind their construction materials. In videos, Palestinians yell at the Israelis to leave, saying “this is not your land, you have no right to be here.”

About a half-hour later, the Israelis returned, flanked by Israeli security forces, witnesses said. According to the Palestinians, police watched the whole incident unfold.

“The settlers threw stones at us. The settler drew his knife and approached one Palestinian who managed to push him away. He caught sight of Ali, who didn’t see him, and stabbed him in the chest,” Ahmad said.

According to the Israeli army, soldiers arrived shortly after Harb was stabbed. Troops offered the Palestinians to rush Harb in an army ambulance to a local hospital, but the Palestinians refused and evacuated him themselves, the army said.

“It is emphasized that Israel Defense Force troops were not on the scene during the confrontation,” an Israeli military spokesperson said.

Palestinian witnesses contested that account. Ahmad, who bore Harb’s body away from the scene, called it “complete and utter lies.”

“The army, the settlement guards, the police, they were all there. They watched while he was stabbed and then prevented us from reaching him for twenty minutes,” said Ahmad.

Eventually, the army permitted them to remove Ali and bear him on foot to Iskaka. By then, he had lost consciousness. He was rushed to a hospital in nearby Salfit, where he was pronounced dead. 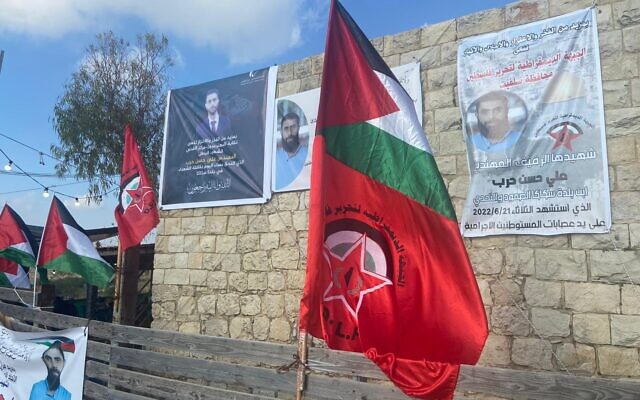 Posters bear the face of Ali Hassan Harb, 27, allegedly stabbed to death by an Israeli settler in a confrontation near the West Bank village of Iskaka, on Wednesday, June 22, 2022 (Aaron Boxerman/The Times of Israel)

Hundreds of Palestinians participated in Harb’s funeral on Wednesday afternoon, walking through the serpentine streets of Iskaka. A few called out slogans in support of Hamas terror group commander Mohammad Deif.

“Place sword next to sword, we’re Mohammad Deif’s men,” some chanted, a reference to the terror group’s logo.

After the funeral, dozens congregated in a mourners’ tent in the village’s small downtown, sipping coffee. Red banners belonging to the left-wing, secular Democratic Front for the Liberation of Palestine fluttered over the mourners.

“Ali was the kind of person who knew everything. He spent all his time reading and learning. He loved to learn,” said Hassan Harb, Ali’s father.

On Wednesday afternoon, Harb’s uncle Naim drove to Qalqilya to file a complaint with Israeli police via the local Palestinian Authority coordination office. But the Harb family said they do not expect a fair and independent investigation.

“I have no trust in this government. This is a government that backs the settlers. They came with the army and the police, who didn’t try to stop the one who stabbed him,” said Hassan.

Israeli officials told The Times of Israel last year that Jewish extremist violence in the West Bank was on the rise. The number of attacks rose in 2021 by nearly 50 percent, according to the Shin Bet.

But most of the cases are never solved. Since 2005, just 3 percent of police investigations into extremist violence against Palestinians have led to indictments, according to the Yesh Din rights group.

Settler leaders have condemned some of the most brazen attacks, such as an incident near the outpost of Givat Ronen in which masked figures torched a car belonging to left-wing Israeli activists. They also say that the phenomenon is dwarfed by the number of attacks by Palestinians against Israelis. 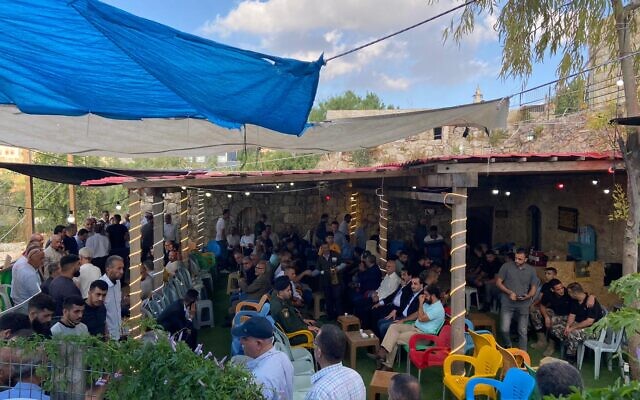 Mourners gather in Iskaka in the northern West Bank to pay their respects to Ali Hassan Harb, 27, who was allegedly killed by an Israeli settler, on Wednesday June 22, 2022 (Aaron Boxerman/The Times of Israel)

The United Kingdom said it was “deeply disturbed” by Harb’s death and demanded the perpetrator be prosecuted.

“Settler violence is a growing problem in the [West Bank] & one that the Israeli Government must do more to tackle. The perpetrator of this crime must be held to account,” London’s envoy to the Palestinians tweeted on Wednesday.