The Defense Ministry on Monday announced it would begin testing a new robotic unmanned combat vehicle it is developing with several Israeli arms firms.

The Medium Robotic Combat Vehicle (M-RCV) — unveiled for the first time at the Eurosatory defense expo being held in Paris — integrates several “cutting-edge technologies,” according to the ministry, including an anti-tank missile launcher, a system for transporting and receiving drones, the ability to carry heavy loads and advanced maneuvering capabilities.

The ministry said the vehicle has the ability to hold a drone for “forward reconnaissance missions,” and an array of passive sensors developed by Elbit and Foresight Autonomous.

“The M-RCV’s capabilities include a highly autonomous solution for forward reconnaissance, and controlled lethality in all-terrain conditions,” the ministry said in a statement. “It is operational during the day and night in all-weather scenarios, while emphasizing operational effectiveness, simplicity, minimum operator intervention, and integration into heterogeneous unmanned arrays.”

The ministry said testing in “representative scenarios” was expected to begin next year, with no estimated date for the vehicle being ready for deployment. 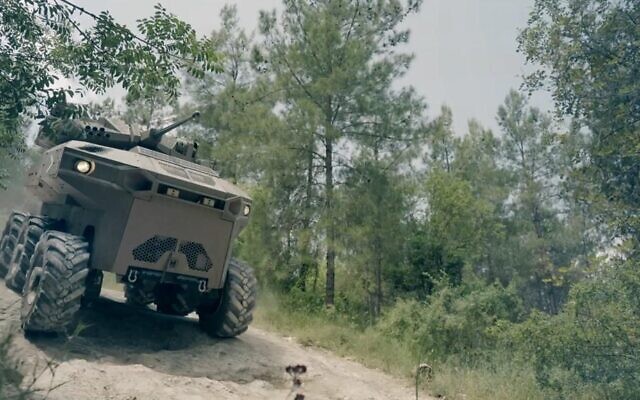 The Israel Defense Forces has already deployed autonomous combat vehicles to assist in patrolling Israel’s border with the Gaza Strip.

Unmanned ground vehicles are being increasingly used by other armies, including those of the United States, Britain, and Russia. Their tasks include logistical support, the removal of mines, and firing weapons.