Israel and the United Arab Emirates signed a comprehensive, “groundbreaking” free trade agreement on Tuesday in a bid to boost economic ties between the two countries, as trade hit about $2.5 billion in the less than two years since the US-brokered Abraham Accords were inked, according to recent estimates.

Israeli Minister of Economy and Industry Orna Barbivai was in Dubai Tuesday morning to sign the agreement with Emirati Minister of Economy Abdulla bin Touq Al-Marri, who last year said that the UAE hopes to generate over a $1 trillion in trade with Israel over the next decade.

The terms of the agreement were finalized last month in Jerusalem with Emirati Minister of State for Foreign Trade Thani bin Ahmed Al Zeyoudi.

Some 96% of products traded between the countries, including food, agriculture, cosmetics, medical equipment, and medication, will be exempt from customs duty, according to the deal. A number of products will be exempt immediately, while others will gradually be granted exemptions.

Speaking from Dubai on Tuesday, Barbivai hailed the “historic importance” of the deal for economic relations between Israel and the UAE, noting that it was the first, full free trade agreement between the Jewish state and an Arab-majority country.

Barbivai said the deal was a “groundbreaking move” for Israel and the UAE that will also serve as an “inspiration for the region” and will “generate unlimited opportunities for business, for entrepreneurs from both countries” to strengthen economic ties.

“Together we will remove barriers and promote comprehensive trade and new technologies, which will form a solid base for our joint path, will benefit citizens, and make it easier to do business. This is a free, full, first trade agreement with an Arab state, which is taking place so soon after the establishment of diplomatic relations,” Barbivai said on Monday, ahead of the signing ceremony.

Israel’s ambassador to the UAE, Amir Hayek, tweeted “mabruk” — or congratulations in Arabic — alongside a photograph of Emirati and Israeli officials holding documents at a signing ceremony in Dubai.

Emirati Ambassador to Israel Mohamed Al Khaja called the agreement “an unprecedented achievement,” saying it would benefit both countries, and thanking the head of Israel’s Foreign Trade Administration, Ohad Cohen, for spearheading the efforts.

“Israel & the UAE just signed a historic Free Trade Agreement – the first of this scope to be signed between Israel & an Arab state,” Prime Minister Naftali Bennett tweeted after Tuesday’s signing ceremony in Dubai.

Al-Marri, the Emirati minister of economy, said Tuesday that the deal “will create a new paradigm in the region” and “accelerate economic growth and strengthen the common belief that the only way to build sustainable economies in a complex world is together.”

The free trade agreement “can prove to nations and governments around the world that collaboration and dialogue are the best ways to turn challenges into opportunities.”

Al Zeyoudi also hailed the “new era of trade and investment” in the region and said the “comprehensive agreement between the two countries will accelerate economic activity” while creating opportunities for research and development, “as well as new investments in agricultural technology, renewable energy and advanced technologies – areas of importance to both countries.” 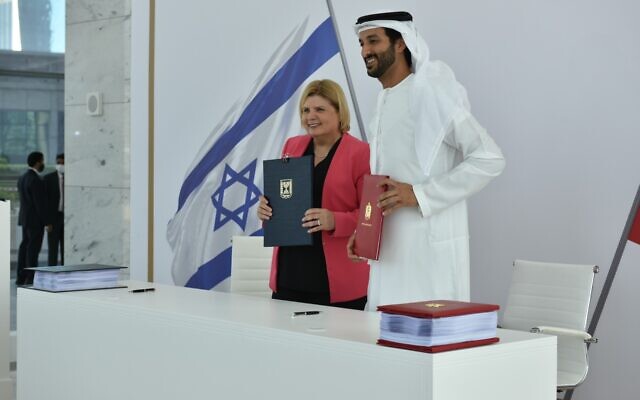 “Throughout the last 18 months, we have proven what can be achieved when disputes and differences are set aside. We are now ready to leverage these foundations and promote a new era of opportunities and entrepreneurship for our citizens, to establish a relationship of mutual respect, tolerance, open and honest discourse, and unity of thought and action. We have no doubt that this agreement will pave the way for a new era of a prosperous economy in our region,” said the Emirati minister of state for foreign trade.

Existing Israel-UAE trade was estimated at an overall $2.5 billion since the signing 2020 Abraham Accords, Zeyoudi said in Davos last week. Over $1 billion of that sum was recorded in trade in the first quarter of 2022, he said.

Zeyoudi said that in 2023-2024, trade between the two countries is forecast to reach $5 billion.

The UAE and Israel signed a normalization agreement in 2020 as part of the US-backed Abraham Accords. Bahrain, Sudan, and Morocco also normalized ties with Israel in the framework of the accords.

Free trade talks kicked off in November 2021 and were finalized in under six months.

Israel has already struck free trade agreements with other countries and blocs, including the United States, the European Union, Canada, and Mexico.

In February, Israel signed a trade deal with Rabat to designate special industrial zones in Morocco.

Ties between Israel and Saudi Arabia have also improved in recent months. According to a report last week by Channel 12, a senior Israeli official visited Saudi Arabia very recently amid growing speculation that Jerusalem and Riyadh are readying small steps toward normalizing relations.

The sides reportedly discussed regional security interests that have further aligned in recent years over common threats posed by Iran.

The reported interaction between two countries, which have no formal relations, came as the US has pushed for cooperation between its allies in the region, and ahead of a Middle East visit by US President Joe Biden; the president will be visiting both Israel and Saudi Arabia.

The kingdom refrained from signing onto the Washington-brokered Abraham Accords in 2020 as the US and Israel had hoped, but Riyadh is believed to have given the go-ahead to Bahrain, where it retains decisive influence, to join the normalization agreement with Israel.

In March, Saudi Crown Prince Muhammad bin Salman said that Israel could be a “potential ally” of Riyadh.

Lazar Berman, Times of Israel staff, and agencies contributed to this report.