Health Ministry director-general Nachman Ash has given the final nod of approval to administering the COVID-19 vaccine to children under 5 in Israel, but stopped short of fully recommending the shot to parents of high-risk children.

According to a letter written by Ash on Friday and made public on Tuesday, the ministry director approved giving the Pfizer or Moderna vaccines to children between the ages of six months and 5 years. That decision, however, fell slightly short of the recommendation last week of a majority of members of the ministry’s advisory panel — 58% — who believed that the shots should be recommended to high-risk babies and toddlers, as well as allowed for anyone in that age group.

Ash wrote that he made his decision after he reviewed all relevant materials, “consulted with all the relevant professionals and weighed the issue with the utmost sincerity.”

The Israeli decision comes several weeks after US health officials approved the shot for the same age range in the United States. Israel must now purchase the doses of the COVID vaccines specifically designed for young children. The exact date for the rollout in Israel will depend on when such doses arrive in the country.

The dose of the Pfizer-BioNTech vaccine for children — the shot widely used in Israel — is one-tenth of the adult dose, and three shots are needed. The first two are given three weeks apart, and the third at least two months later.

In an interview with Israel’s Channel 12 last month, Pfizer CEO Albert Bourla backed the US FDA’s decision, saying he “would give [the vaccine] now” to his young child if he had one. 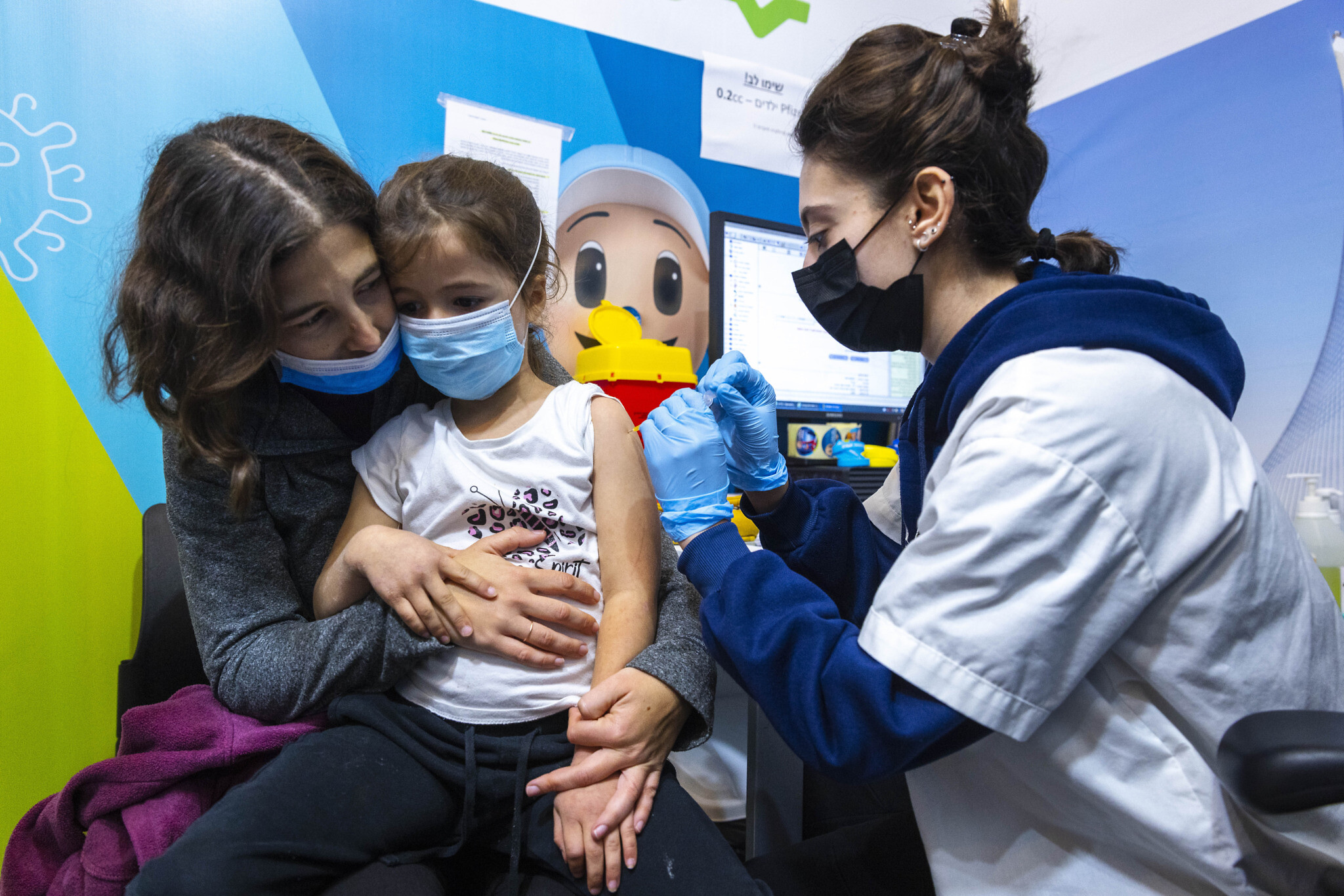 A young girl receives a dose of the COVID-19 vaccine in Jerusalem on December 30, 2021. (Olivier Fitoussi/Flash90)

However, data suggests that interest in COVID vaccines for babies and toddlers is expected to be fairly low in Israel. As of Tuesday, less than 18% of all children ages 5-11 in Israel have received two doses of the COVID vaccine, and only 25% have received one dose.

Anti-vaxxers in Israel have been particularly vocal against administering the COVID shots to children, including demonstrating outside schools where the vaccines were being given and threatening public health officials over the issue.

Former Likud MK Moshe Feiglin — a noted anti-vaccination activist who announced this week that he intends to run in the party’s upcoming primary — said on the radio Tuesday morning that anyone under 30 should “avoid the COVID vaccines like fire.”

The Health Ministry issued a scathing response to Feiglin’s comments, slamming it as “nonsense” and dismissing him as someone with “no understanding of the issue.” The ministry said the former MK’s recommendation stands “in contrast to all professional literature and international studies on the subject and to the guidance of official professional bodies in Israel and around the world.”

An Israeli study released last week found that COVID vaccines halved the risk of COVID infection in children ages 5-11 during Israel’s winter wave of the disease. The newly peer-reviewed study, led by Clalit Healthcare Services — one of Israel’s four healthcare providers — compared COVID records of 94,728 Pfizer-vaccinated children and the same number of unvaccinated children. Researchers found that during the two weeks after children’s second dose kicked in, they had 51% protection against becoming infected, and 48% protection against infection with symptoms.

Meanwhile, COVID cases in Israel are once again on the rise just as school lets out and summer vacation begins. On Monday, 13,877 new cases were confirmed, the highest one-day tally since February. Among those tested, more than 30% came back positive, and there are 66,579 known active cases in the country.

Serious COVID cases are also on the rise, standing at 374 on Tuesday, up from 304 one week ago and 185 two weeks ago. The R reproduction number, however, appears to be dropping, currently standing at 1.05. Experts suggest that this current wave is likely to begin receding soon without the damage of previous waves of the virus.