Tens of thousands of Israeli high school students slated to visit Poland on heritage trips over the summer will not travel there due to a diplomatic dispute with Warsaw over security for the delegations, the Education Ministry said Tuesday.

“It has been decided at this time that the activities of the youth delegations to Poland will be frozen,” an Education Ministry missive read, sent out to approximately 7,000 students who were meant to go on the trips.

The Polish government has refused to allow Shin Bet agents providing security for the trip to carry weapons while on their territory unlike in previous years, according to a report by the Walla news site earlier this month, forcing the Education Ministry to cancel the trip.

The Foreign Ministry stated that negotiations are ongoing with the Polish government and that Poland is “interested in continuing student trips from Israel,” adding that the Israeli side is making efforts to allow delegations to return.

Parents who already paid for trips will be refunded, the ministry told the National Parents Council, according to Channel 12 news. However, because each school booked the trip with different airlines and agencies, it’s not clear whether all will actually get the thousands shelled out for the trip back, the report said.

One parent expressed frustration over the dispute, feeling as if the state had abandoned them to deal with the airlines. 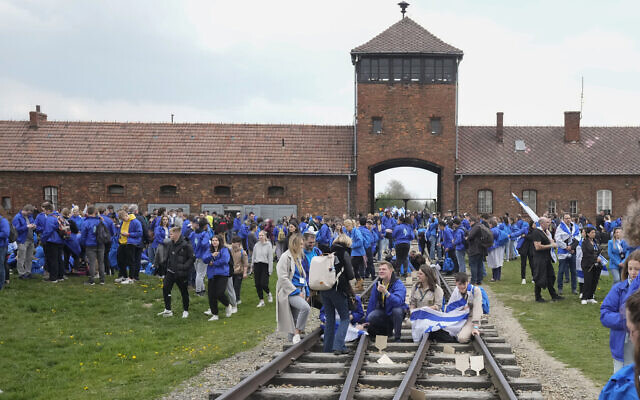 Visitors to the Auschwitz Nazi concentration camp after the March of the Living annual observance, in Oswiecim, Poland, April 28, 2022. (Czarek Sokolowski/AP)

“They left the parents to deal with tuition and payment with the [airline] companies,” a disgruntled parent told Channel 12.

An earlier dispute regarding the Polish government’s desire to alter the trip’s educational content was solved by the two countries, sources told Walla, without specifying the details of the compromise.

Before COVID, thousands of Israeli students would travel to Poland each year to learn about the Holocaust and pay respects at former Nazi camps, as well as visit sites important to European Jewish history.