Neda Amin, an Iranian journalist and former Times of Israel blogger who was given safe haven in Israel in 2017, is facing deportation on the orders of Interior Minister Ayelet Shaked.

Amin told Channel 12 news on Monday that she was “shocked” at the way she is being treated, and that she has nowhere to go. Her lawyer, Tomer Warsha, has appealed Shaked’s decision, as a breach of international legislation regarding refugees.

Amin has been ordered to leave the country within a year following a recommendation by the Shin Bet, which alleged that she was in contact with Iranian intelligence officials. Warsha described this allegation as “a fig leaf” and an “excuse” to compel Amin to leave. He noted that Amin had been questioned over the allegation in the past: “She was not arrested, no action was taken against her, and she did not pose any danger.”

A committee that investigated Amin’s request for formal status in Israel unanimously recommended that she be given permanent status. A Justice Ministry recommendation to the committee said she had been “hounded” in Iran and her life had been in danger as a consequence of her public criticism of the Iranian authorities, and described her as a “credible” applicant.

Amin left Iran for Turkey in 2014, where she worked as a journalist and also blogged at The Times of Israel. In August 2017, Amin said she was facing deportation from Turkey and feared for her life amid concerns that the Turkish authorities would send her back to Iran.

Within days, with the aid of The Times of Israel, she was granted a visa to enter Israel by then-interior minister Aryeh Deri, and Israeli consulate officials in Turkey helped pave the way for her arrival.

In 2019, Times of Israel editor David Horovitz — who met Amin at the airport when she landed in Israel — penned a public appeal for her to be granted permanent status in Israel allowing her to work, build a new life and attain citizenship. She has told The Times of Israel that she has longed to begin the process of formally converting to Judaism, but has been stonewalled.

Amin was recognized as a refugee by the UN while living in Turkey, but she has been forced to extend her Israeli “temporary visitor” permit every three months since her arrival, and has battled authorities in an attempt to gain more permanent footing.

On Monday, it was revealed that Interior Minister Shaked ordered Amin, who has a young Israel-born daughter, to leave Israel within a year. Amin said her daughter holds Israeli citizenship, but she is concerned it would be stripped from her.

In a statement to the TV network, the Shin Bet said that Amin was investigated during her time in Israel for contact with Iranian intelligence officials, and that she continued to be in touch with them “despite a clear warning from security officials on this matter.”

Amin told Channel 12 news on Monday that she conversed with one such individual only on personal issues and kept up the connection because of her work as a journalist, and she passed along any information she had to the Shin Bet.

The Shin Bet confirmed in 2018 that there was no evidence of illegal activity on her part.

“They broke my heart,” Amin was quoted by Channel 12 as saying on Monday. “When I got to Israel they treated me like a princess or a queen with a red carpet.” Amin said it was not logical for the state to say she poses a danger to citizens but also allow her to remain for another year. 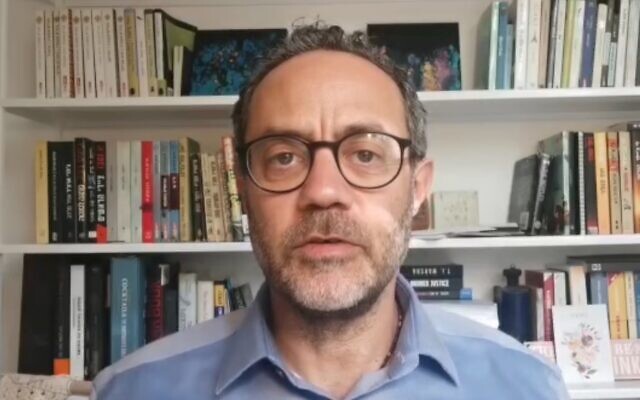 Warsha, a prominent immigration attorney who is representing Amin, said he has appealed the decision in court, and that any justification provided by the Shin Bet over her deportation was “a fig leaf” being used by Shaked.

Said Warsha: “I don’t recall a case such as this where the minister makes a decision that contradicts the recommendation of professionals in the ministry, and in opposition to a team of experts that studied and researched the case and made a determination.”