The Israel Defense Forces damaged, but did not destroy, a Hamas observation post that overlooks an Israeli town close to the border with the Gaza Strip because they did not want to cause casualties in the attack, the Kan public broadcaster reported Sunday.

The report said the attack on the post was carried out with a targeted strike from a helicopter gunship, instead of being bombed by a warplane, because the IDF preferred not to kill the Hamas operatives on the ground near the post in order to prevent a further escalation along the Gaza border.

Israel had struck the post on Saturday morning in response to rocket fire on southern Israel, but had not destroyed it. Members of Hamas returned to the site hours later and raised flags of the terror group and its armed wing, the Izz ad-Din al-Qassam Brigades.

On Sunday, the damaged post was completely restored to its original form, images showed.

Residents of Netiv Ha’asara have long expressed concerns about the raised observation post, which overlooked a wall that was meant to protect the town from attacks. According to reports, the site was erected some six months ago.

On Saturday, residents expressed disappointment that the strike did not completely demolish the lookout site, which was one of four targets hit by the IDF after a rocket was fired overnight at the coastal city of Ashkelon.

Prior to the strikes, members of the Hamas terror group could be seen guarding inside the observation position. Immediately after the rocket was fired shortly after 3 a.m., Hamas members were seen removing cameras and equipment from the position before abandoning it.

A few hours later, the IDF carried out two precision strikes on the position, destroying the cabin but not its supporting structure.

The strikes were carried out after Palestinian terrorists fired a rocket toward the southern coastal city of Ashkelon in the early hours of Saturday, the first projectile to be launched at Israel from Hamas-ruled Gaza since April. According to the IDF, the rocket was intercepted by the Iron Dome missile defense system.

There were no injuries or damage and no terror group immediately claimed responsibility for the attack.

Meanwhile,  the military plans to move the entrance of  Netiv Ha’asara one kilometer to the east so that it is no longer overlooked and threatend by the Hamas post, Channel 112 reported. The move will include the paving of a new road so that residents can securely enter and exit the communtiy.

However, there were still disputes about who would fund the works, the report said. 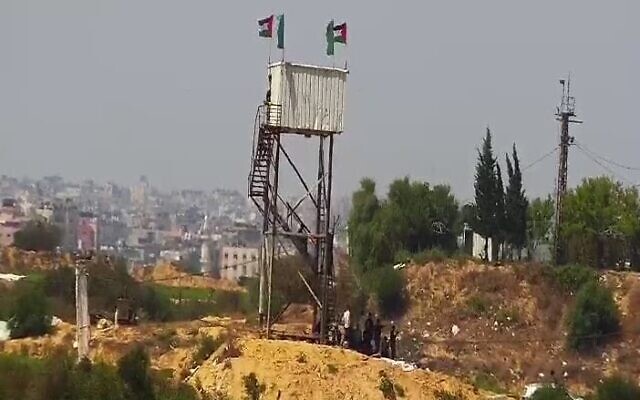 An observation post in Gaza overlooking the Israeli border community of Netiv Ha’asara is rebuilt a day after an IDF strike, June 19, 2022. (Dadi Fold/Courtesy)

While the IDF holds Hamas ultimately responsible for any terror emanating from the Gaza Strip, Israel was examining whether the rocket was fired overnight by Islamic Jihad terrorists in response to the deaths of three Palestinians killed in a gunfight with Israeli troops early Friday in Jenin, Hebrew-language news outlets reported without citing a source. According to the military, the soldiers were fired upon while operating in the northern West Bank city and “neutralized” the gunmen who shot at them.

A banner with images of the three gunmen was also raised at the observation post on Sunday.

The latest rocket attack came a day after the IDF touted new defensive measures as key to preserving one of the quietest periods along the Gaza border in years, while warning that Hamas was working to circumvent them in a potential surprise attack just over a year after the sides fought an 11-day conflict.