Iran is stepping up uranium enrichment at its underground Fordo nuclear site, according to a confidential International Atomic Energy Agency report seen by the Reuters news agency on Monday.

The report said Iran is taking steps to fulfill its threats to use a second cascade of the advanced IR-6 centrifuges at Fordo. The centrifuges can more easily switch between enrichment levels.

IAEA inspectors verified on Saturday that Iran was ready to feed uranium hexafluoride (UF6) gas, the material centrifuges enrich, into the second of two cascades, or clusters, of IR-6 centrifuges installed at Fordo, Reuters said, quoting from the confidential IAEA report to member states.

Fordo is one of Iran’s most sensitive nuclear sites, buried deep under a mountain, which makes it largely impervious to a military strike.

An IR-6 centrifuge spins uranium 10 times faster than the first-generation centrifuges that Iran was once limited to under its nuclear deal with world powers. As of February, Iran has been spinning a cascade of IR-6s at Fordo, according to the IAEA.

According to the report, Iran informed the nuclear watchdog on Sunday that it had begun the process that precedes enrichment, known as passivation of the cascades. 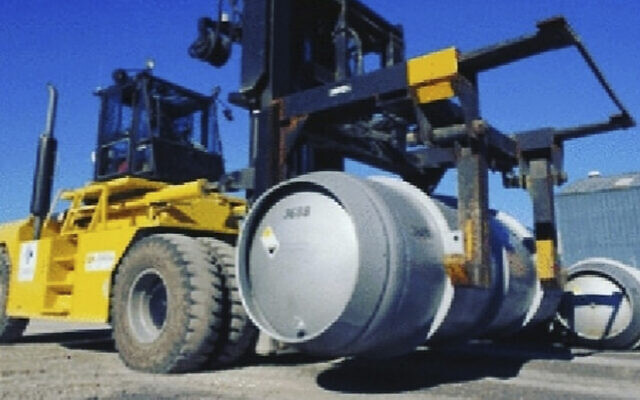 The report noted that the IR-6 cascade has “modified sub-headers,” which enable it to switch to enriching to other purity levels, something that has been a concern for Western diplomats who note it enables Iran to quickly switch to higher enrichment levels.

Iran has not informed the IAEA to what level it would be enriching the uranium. Iran has since February been enriching up to 20 percent purity with a cluster of 166 advanced IR-6 machines.

“The Agency has yet to receive clarification from Iran as to which mode of production it intends to implement for the aforementioned cascade, following the completion of passivation,” the report said.

Iran has been enriching uranium to 60% at Natanz, another site, a short step before 90% weapons-grade uranium.

Iran has been escalating in its violations of the deal — which bars any enrichment at Fordo — since former US president Donald Trump withdrew from the agreement in 2018 and began imposing significant sanctions on the Islamic Republic.

In the last month Iran has also removed 27 surveillance cameras from nuclear sites across the country.

The development came a day after the International Atomic Energy Agency’s board of governors censured Tehran for failing to provide “credible information” over manufactured nuclear material found at three undeclared sites in the country.

It also follows months of deadlocked over stalled talks aimed at restoring the Islamic Republic’s 2015 nuclear deal with world powers. Tensions remain high across the wider Middle East over the accord’s collapse as U.S. sanctions and rising global food prices choke Iran’s ailing economy, putting further pressure on its government and its people.