Hours before the dramatic announcement that the year-old Naftali Bennett-Yair Lapid government would dissolve itself and go to elections, the prime minister held a briefing with Israel’s diplomatic reporters.

It was the type of briefing that Bennett had done with these reporters a couple of times before — a prepared statement, then time for a free-wheeling, off-the-record question-and-answer session about a range of foreign policy and security topics.

It started as all the others did. We arrived at the Prime Minister’s Office in Jerusalem at 11:30 am, went through the security check, and waited in the old briefing room while snacking on fruit and schmoozing with members of the spokesman’s office.

More than an hour later, we were ushered up to the Aquarium, the prime minister’s inner sanctum. The reporters sat on one side of the long table in the middle of the wood-paneled cabinet meeting room, and when Bennett came in several minutes later, he sat facing us, flanked by his new spokesman Yotam Ben-Yitzhak on his left, and Military Secretary Avi Gil and Head of Public Diplomacy Elad Tene on his right.

It wasn’t immediately clear why Bennett’s staff had only a day before invited us to this briefing.

Looking back now, knowing that Bennett was about to announce the end of his government, the briefing now seems like something of a parting address, making an argument — perhaps to convince himself as much as our readers — that the short-lived political experiment he headed was a success. 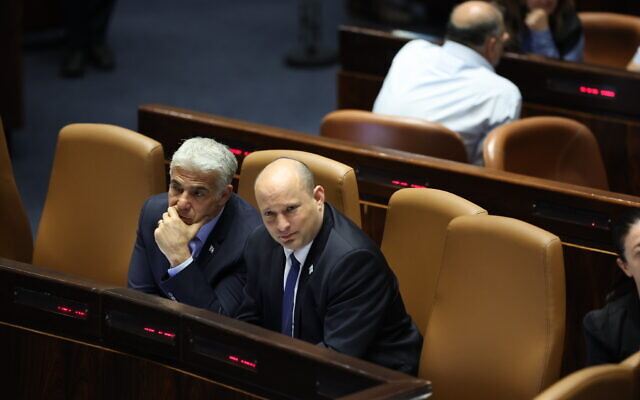 He then turned to the July visit of US President Joe Biden, who will now be received by Yair Lapid as prime minister. “The visit is vital for the State of Israel,” said Bennett, “because it will deal with the sum of the activities we have carried out over the past year.”

He spoke about the cooperation between Israel and Turkey in stopping Iranian attempts to harm Israelis. He laid out the short — and long-term goals for Israel in fighting Iran’s proxies and in stopping its nuclear program. Bennett lauded Israel’s improved deterrence against Hamas, stressing that his year in office was the quietest on yet for residents of Sderot and border communities since the 2005 Disengagement.

“This year, Israel is stronger and deters more,” he concluded. “We have many problems, many complexities, but all in all the country is, in the majority of fields, progressing nicely.”

Though he knew that his government had only hours left to live, Bennett did an admirable job — or perhaps a deceitful one — hiding what was to come. He spoke at length and calmly about future plans in Gaza and in the region.

However, there was one answer that foreshadowed what he was about to announce. He was asked by Channel 13’s Moriah Asraf Wolberg if he would still be prime minister when Biden arrives. The prime minister paused for three long seconds, removed his reading glasses, and said candidly, “I don’t know. I really don’t know.”

It turns out, of course, that he knew that he was in his final days leading the country.

Minutes later, after the two-hour-long briefing was over, Bennett went around the table to shake the hands of Israel’s diplomatic correspondents, before heading back to his office to get ready to turn out the lights on his government.