Yair Golan announced this week that he would challenge Nitzan Horowitz — the man who brought him into Meretz only two years ago — for the chairmanship of the left-wing party.

A former Israel Defense Forces deputy chief of staff who fought for years in the West Bank, Golan still calls the area by the biblical “Judea and Samaria.” But he is also a strident critic of the settlement movement and calls regularly for the “end of the occupation.”

He does not believe in God, but wants to preserve Israel as a Jewish and democratic state, and calls Meretz the “Zionist” left.

If Golan bests Horowitz, he’ll become Meretz’s fourth leader in five years. But he’s still something of an outsider. Not all party stalwarts were happy with the decision to bring him aboard and give him a high spot on the party’s Knesset slate in 2020.

Horowitz is also facing down questions from some who are unhappy with his stewardship of the party he took over in 2019, especially since the emergence of notoriously inaccurate but politically influential polling numbers showing Meretz flirting dangerously with the electoral threshold.

Horowitz navigated Meretz through a tumultuous year, bringing the party into its first ruling coalition in two decades, but in a big tent coalition that forced all of its members to make deep ideological compromises. 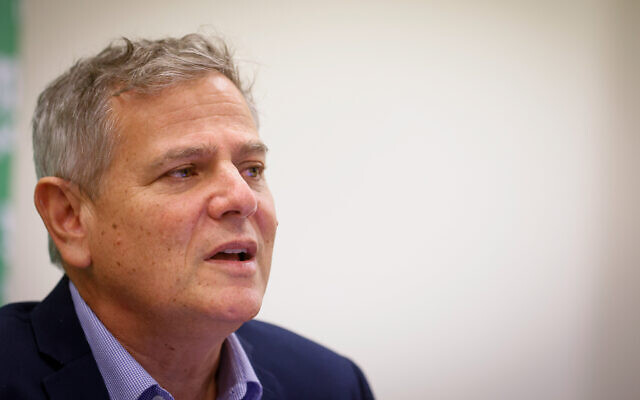 “It was clear to Meretz if it went into the coalition, it would have to pay a price,” former Meretz head Zehava Galon told The Times of Israel on Thursday.

Horowitz also appears to have erred in bringing in Ghaida Rinawie-Zoabi, an untested lawmaker whose rebellion against the coalition helped hasten its demise.

As deputy minister of economy and industry in addition to being a lawmaker, Golan also experienced highs and lows in the outgoing government.

He said he was proud to be involved with budgeting NIS 2.16 billion ($624 million) for Arab economic development as well as outlining a workplace safety apparatus akin to the US’s Occupational Safety and Health Administration, but the government fell before his wins could take full effect.

Golan is gunning for the leadership of one of the country’s flagship progressive parties at a time when Israel’s left-wing appears to be at a historical nadir, with even the word “leftist” taking on a negative connotation in the political vernacular.

The Harvard-educated ex-general, with a penchant for controversial remarks, tells The Times of Israel that he’s running for the party leadership to change that culture.

“For decades now, we are dealing with this crazy incitement machine that in its view, the ‘left’ is traitorous. Even the expression ‘leftist’ is demeaning, there is no parallel for the right,” he said in Hebrew. “It’s something that’s intended to embarrass and to trample [over us] and we should fight it.”

“Because of that, I think I should lead Meretz, because I’m a fighter on these issues, and I think the left needs to fight for its honor and not give up.”

Golan sat down with The Times of Israel Thursday to discuss his take on the Israeli left, the Israeli-Palestinian conflict, and what’s at stake during Israel’s fifth round of elections since 2019, taking place on November 1. The conversation was conducted in Hebrew and edited for length and clarity.

Q: How do you define Meretz? What is at the party’s core?

Meretz is a left-wing Zionist party.

What does that mean? A left-wing party in my view is a party that puts man at the center and is oriented toward the future. Not God in the center, and not the nation, and not the people, and not the homeland, and all of those blown-up words, but rather the human being at the center.

What’s happening on the ground is that we’re building toward annexation. The annexation of millions of Palestinians inside of the State of Israel is the end of the Zionist dream… There won’t be a Jewish state without a Jewish demographic majority.

[Another issue is] religion and state. We think we need to be closer to the United States of America than to Iran. 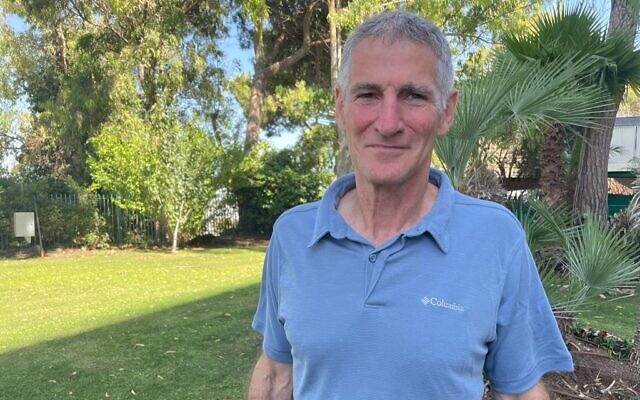 We need to separate them. A person’s belief is his business… The Chief Rabbinate doesn’t need to enter our bedrooms. How I get married? How I get divorced? Why [is it like this]?

The [next] issue is equality. You can’t ignore the clear fact that 20% of Israel’s population is Arab. This is a huge minority… It’s said that the left loves Arabs. We love ourselves, we love the State of Israel. We understand that in order to participate in this great effort of building a state, an economy, a society, you can’t tell [Arabs] that you’re second-class citizens. Why would they want to cooperate?

So on the one hand I say we have to separate from the Palestinians in Judea and Samaria and Gaza, unequivocally. And with the Arabs [within Israel’s 1948 borders], we have to create a partnership with them.

Q: What happened to Meretz this year? MK Ghaida Rinawie Zoabi rebelled, Minister Esawi Frej announced that he is leaving politics, is the party breaking apart?

There’s no breaking apart. There is, what is at the end of the day a mistake, that was made with Ghaida. I’m not here to settle scores with anyone on this issue. I think that yes, a mistake was made to bring someone who was a bit of an unknown quantity, that wasn’t really fundamentally clear on who and what she was, it’s a pity and a mistake [but] I don’t think it’s a terrible blow to Meretz. 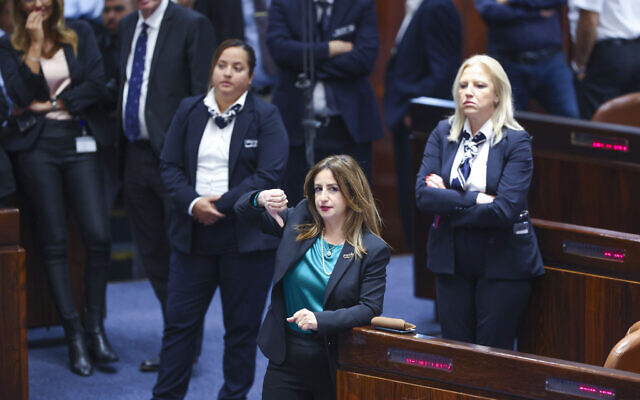 Meretz MK Ghaida Rinawie Zoabi attends a vote on a West Bank bill at the Knesset, in Jerusalem on June 6, 2022. (Yonatan Sindel/Flash90)

Instead of suspecting that there’s a crisis here, I think it’s a rare opportunity for renewal.

Q: If you succeed in your candidacy, you’ll be the fourth Meretz leader in under five years. Is this really what Meretz needs right now, to switch leaders instead of stability?

I think we need something new for three reasons. First, because we aren’t succeeding in growing enough. Renewal is also a question of leadership, and I believe in my ability to turn to different audiences, to connect to audiences who in the past didn’t vote for Meretz… to connect to these people and bring them home.

The second issue is focus. I think that Meretz really stretched itself over a lot of different issues, which is natural and I don’t say it as criticism. But in the eyes of the Israeli voter, sometimes it’s like “what exactly do you guys want?”

You can’t raise the flag of environmental protection and of LGBT rights with the same strength. They are very important … but to raise many flags like this, like animal rights, like minority rights, at the end of the day you have many flags without one flag to rally around. 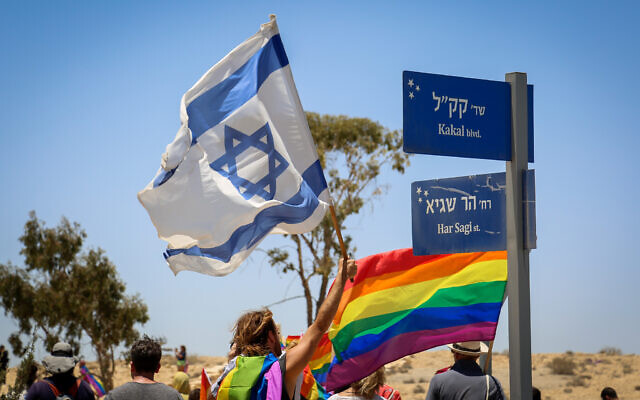 I think that this strategy is not right, we have to go to the Israeli public with something that looks like a real national issue, a gigantic flag. I think this flag is separation from the Palestinians.

Centrist parties stopped dealing with this. They just don’t talk about it.

I think it’s an advantage. Sometimes you need someone who is a little extraordinary, who is not the most typical typecast of classical Meretz, in order to say “look, if we want to grow and be a party with double-digit seat numbers, not fighting over [spots] 4, 5, 6, then we need a change.”

Q: Are you in favor of uniting with Labor? Labor leader Merav Michaeli says a unison is not on the table.

I think conceptually, unification is a positive thing if we want to return the [center-left] Zionist camp to its natural number of seats in the high double digits, we have to speak in the language of unification within the Israeli left. 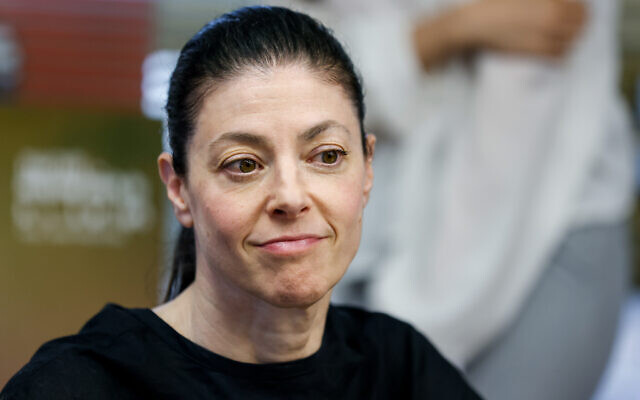 Q: What is your position on joining a coalition with ultra-Orthodox parties. You said earlier today that the Haredi community was “not the future” of Israel. Are there parties that are red lines that would keep you from joining a coalition?

I have no problem sitting [in a coalition] with Haredim. I really don’t disqualify them, I’ve said it countless times in the past. I disqualify only two types. I think there’s no reason to sit with people who are corrupt, and therefore I don’t see myself sitting with [opposition leader Benjamin Netanyahu].

I am not saying I wouldn’t sit with the Likud in a future constellation when Bibi is not the Likud leader. But with [Netanyahu] I can’t sit, because of his personal and public corruption. This is my opinion, I know it’s still not proven in a court. 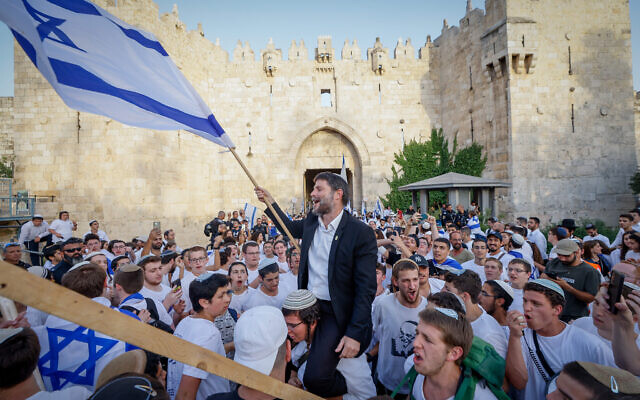 In the [Arab-led] Joint List there are a lot of different voices, that’s why it’s called “joint.” I have no problem sitting with the Joint List. But I think it requires neutralizing components that in the past were very problematic, at least in the eyes of every Zionist party.

Q: Is this election, like the four before it, going to be a referendum on Netanyahu?

This person that is very politically strong, and in my view is also very morally corrupt, will continue to cast a large shadow over Israel. 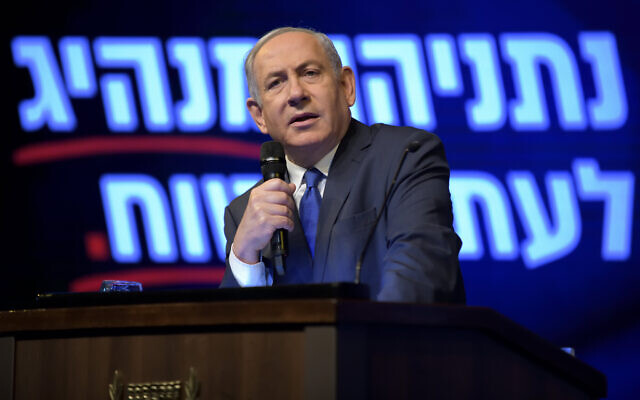 Q: You say Israel has to “end the occupation.” What did you experience in your 38 years in the military to convince you that this is the correct decision, and how can Israel do it?

You know, for so many years I fought all over Judea and Samaria, I know every Arab city from the inside. In my view, it was completely clear that it’s impossible to continue with it, nothing good can come out of it.

Even with all the risks that come with it, and I’m not dismissing the risks, it’s still preferable for the State of Israel and we have to separate.

History will one day be the judge and we’ll see how much it really was necessary to separate from the Palestinians.