For the first time in decades, the Gaza Strip’s beaches are safe for swimmers, according to a Reuters report Thursday, following a project to clean up the Mediterranean Sea that was funded by various international organizations and an Israeli-Palestinian-Jordanian environmentalist group.

EcoPeace, with headquarters in Tel Aviv, Ramallah and Amman, works to advance environmental cooperation in Israel, Jordan and the Palestinian Authority, with a focus on water issues and climate action. It also runs numerous educational programs for the region’s youth.

One of its latest projects, coined the “Green Blue Deal,” calls for building water desalination plants in Gaza as part of a larger plan to coordinate water and renewable energy resources. EcoPeace and other bodies funded research into the feasibility of the overall project and advocated for its implementation, according to a December 2020 report from the group.

Gaza suffers from an acute water crisis, with inadequate water filtration systems to support its 2.3 million residents. A World Bank report noted that over 95 percent of water in Gaza was not potable and that existing groundwater sources were unsustainable and contaminated. Over 97% of Gaza residents got their water from unregulated sources, the report added.

EcoPeace has been involved in water desalination in Gaza since 2016, the organization’s co-founder and Israel director Gidon Bromberg told Channel 12 news. It was then that the World Bank, which had been working on the project for over a decade, requested EcoPeace’s assistance.

The World Bank’s project had been stalled by Israeli security concerns. Cement and other building materials necessary for desalination plants are considered “dual-use” material and can be used for either civilian or military purposes. Israeli authorities heavily regulate the import of these items to Gaza, which is ruled by the Hamas terror group.

“Israeli authorities claimed that Hamas was stealing cement. Without cement, it is impossible to build purification facilities,” Bromberg said. 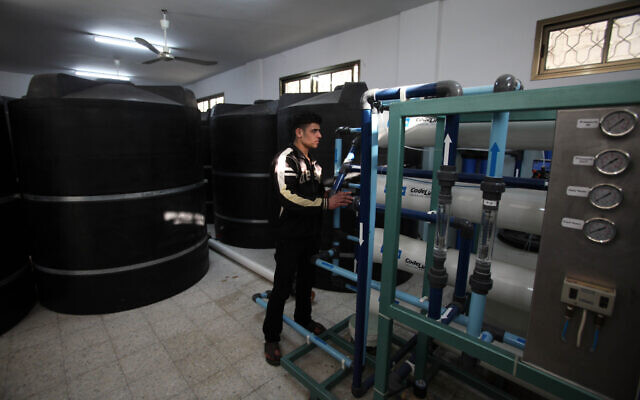 EcoPeace, however, continued to advocate for the project, highlighting the broader impact that the lack of desalination plants in Gaza has on the region, including on the Israeli public. Untreated Gazan wastewater flows directly into the Mediterranean Sea and over 108 million liters reached the sea daily in 2017.

Because seawater on Israel’s coast flows from south to north for most of the year, large amounts of contaminated water reached Israeli beaches.

The spreading wastewater forced the Ashkelon desalination plant to close multiple times in the past as well as the closure of Israeli beaches. 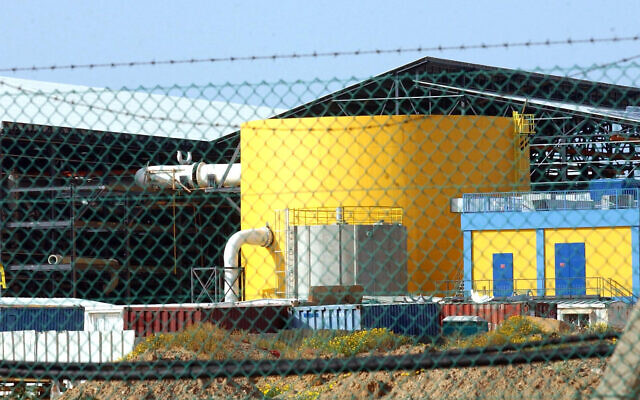 File: View of an Israeli desalination plant in Ashkelon, not far from the northern border of the Gaza Strip. (Edi Israel /Flash90)

Israeli security officials eventually cleared the way for the project, which is jointly funded by Arab Gulf states, the European Commission and others.

According to Bromberg, there are now three facilities that together treat approximately 60% of Gaza’s sewage, improving water quality within the Strip as well as nearby Israeli beaches.

Officials from the Hamas-led Environment Quality and Water Authority, operating in Gaza, said that 65% of Gaza’s beach water is now clean and suitable for bathing.

“Our children used to come back home with viruses and skin diseases,” Sahar Abu Bashir, a Gaza resident and mother of four, told Reuters in regards to the water quality at local beaches. “Today the area is clean and the sea is clean. We felt as if we were in another country.”