Defense Minister Benny Gantz has delayed a trip to India, for the second time, after opposition lawmakers refused to offset his absence during votes in the Knesset.

Gantz was set to travel to India Wednesday afternoon to sign a “special security declaration” marking 30 years of security and diplomatic relations between the countries. The trip was initially meant to take place in late March, but Gantz postponed it amid a series of deadly terror attacks in Israel and the West Bank.

On Wednesday, hours before the scheduled flight, a Likud party source confirmed that the opposition would “absolutely” refuse to offset Gantz’s vote.

Offsetting votes is a common Knesset practice, whereby a coalition and an opposition MK cancel out their votes, as a courtesy, by an agreed-upon mutual absence or abstention.

It was not immediately clear if Gantz would fly later in the day. A Defense Ministry spokesperson said the trip would occur at a later time or date; a spokesperson for Gantz’s Blue and White party said he would stay in the country for now.

The move by opposition lawmakers came after Likud and its right-wing religious allies said Monday that they would not support any upcoming coalition legislation, reaffirming that their top priority was toppling the ailing government.

Since losing its majority in early April and weathering several temporary defections in the ensuing two months, the coalition has struggled to gain a Knesset majority to pass its legislative agenda. This has become especially complicated with laws relating to security, which the Islamist Ra’am party has found politically difficult to support.

Lacking a majority, the coalition has sought to rely on opposition support, often given in the form of vote abstention. 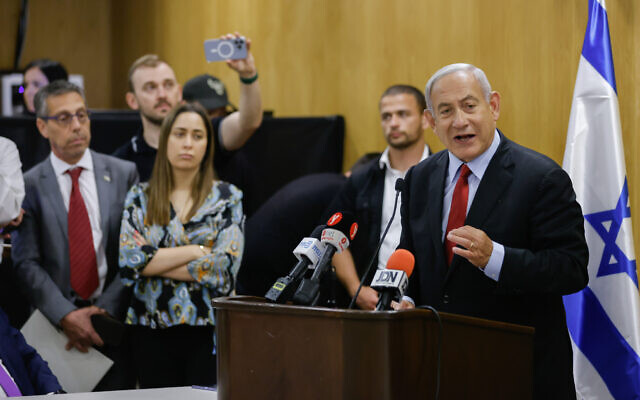 The declaration Gantz and his Indian counterpart, Rajnath Singh, are due to sign is expected to be largely ceremonial. However, the original meeting in March was scheduled to include talks on improving security relations between the countries.

Gantz’s office has not detailed the schedule of the trip, or when he had been expected to return.

Israel has sought to tighten defense ties with New Delhi in recent years, especially in the fields of air and missile defense.

India is one of the largest customers of Israeli weapons systems, purchasing billions of dollars worth of equipment in recent years and embarking on several joint projects with Israeli companies. 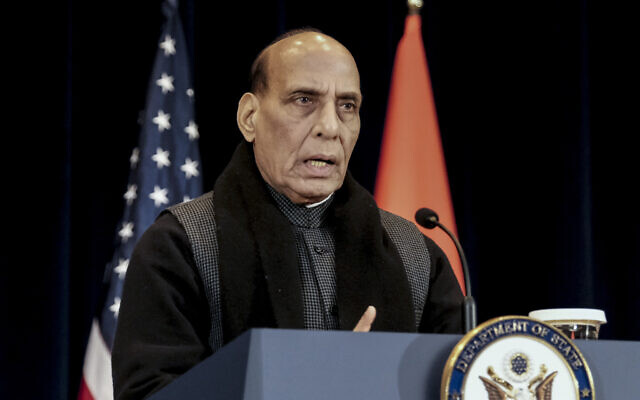 India’s Defense Minister Rajnath Singh speaks at a news conference during the fourth US-India 2+2 Ministerial Dialogue at the State Department in Washington, Monday, April 11, 2022. (Michael A. McCoy/Pool via AP)

Prime Minister Naftali Bennett also scheduled a trip to India marking 30 years of full diplomatic relations back in March, but postponed it after contracting COVID-19. He has yet to announce a new date.

Though New Delhi recognized Israel in 1950, ties were long frosty between the two nations, owing largely to India’s large Muslim population and its leadership role in the Cold War-era Non-Aligned Movement.

Full diplomatic relations were established in 1992.

Under the leadership of former Indian prime minister Atal Bihari Vajpayee, ties blossomed between India and Israel, culminating in the late prime minister Ariel Sharon’s 2003 visit to the country, the first by an Israeli premier.

Defense, economic and diplomatic bilateral ties continued to grow in recent years, and Narendra Modi — like Vajpayee, a member of the right-wing Bharatiya Janata Party — became the first Indian premier to visit Israel in 2017.

During a trip to Israel last year, where he extended the invitation to Bennett to visit, Indian Foreign Minister Subrahmanyam Jaishankar lauded the business relationship between his country and Israel, saying at a meeting with CEOs and government officials that India regards Israel “in many ways as perhaps our most trusted and innovative partner.”