AFP — In his small office in the Israel Diamond Exchange near the coastal city of Tel Aviv, Pravin Kukadia proudly presents his collection of precious stones.

Between Kukadia’s homeland, India, and his country of residence, Israel, diamonds have forged a key diplomatic and economic link — representing some $1.5 billion a year and roughly half of all trade between the nations, according to diamond experts.

Kukadia first came to Israel in 1996, but soon made regular visits to Israel as a buyer for his family business based in western India’s Gujarat state’s Surat city — where 90 percent of the world’s diamonds are cut and polished.

“At that time, I bought rough diamonds,” he said, carefully inspecting a particularly rare example, a rose-colored diamond. “I bought small sizes — my speciality was small and cheap.”

In 2003, he moved with his wife and two children to develop his business in Israel because it was “a major player in the diamond industry” and at the forefront of innovation in the field. 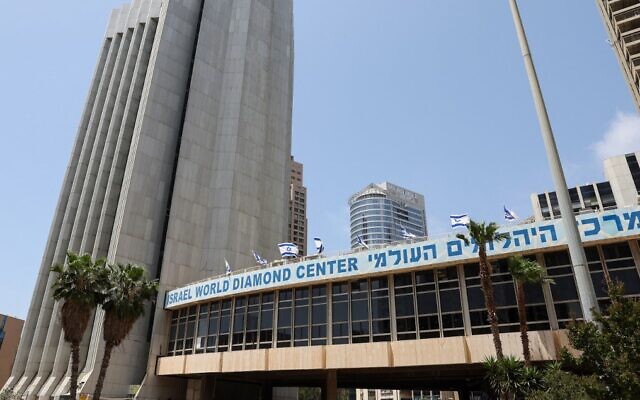 This picture shows part of the Israel World Diamond Center, in the Tel Aviv suburb of Ramat Gan, May 16, 2022. (Jack Guez/AFP)

At that time, India “didn’t have the technology like here,” said Kukadia, who imported Israeli technology including laser machines for his Indian operations.

Israel’s Diamond Exchange is home to some 30 Indian companies, he added, making India the foreign nation with the biggest number of firms on the bourse.

Most Indian diamond families, about 80 people, live close to the diamond exchange in the city of Ramat Gan, and many stay in the same building. “We are one and the same family,” Kukadia said.

“Since 2018, they can work and live in Israel indefinitely, and bring their families,” Pex said. “They must renew their visas every three years, compared to two for diamond traders from other countries.” 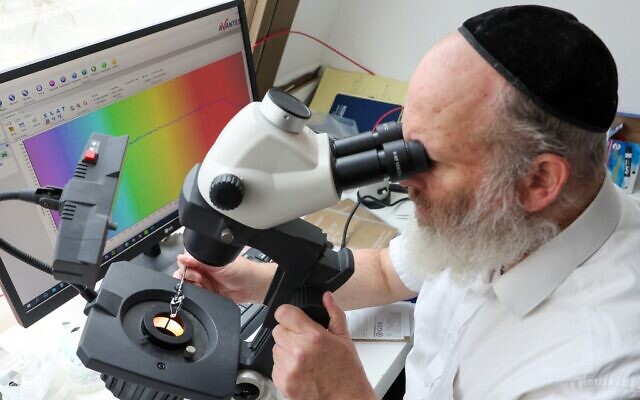 A diamond dealer checks the clarity and quality of a diamond in the Israel World Diamond Center, in the Tel Aviv suburb of Ramat Gan, May 16, 2022. (Jack Guez/AFP)

The huge complex of the diamond exchange is also home to the State Bank of India (SBI), the only foreign bank present there, alongside two Israeli banks.

“The diamond industry’s trade with India accounts for about 50 percent of all general trade between Israel and India, representing $1.5 billion per year,” said Boaz Moldawsky, president of the diamond exchange.

Israel sources raw stones from around the world, while many Indian companies specialize in polishing the rocks into gleaming gems. 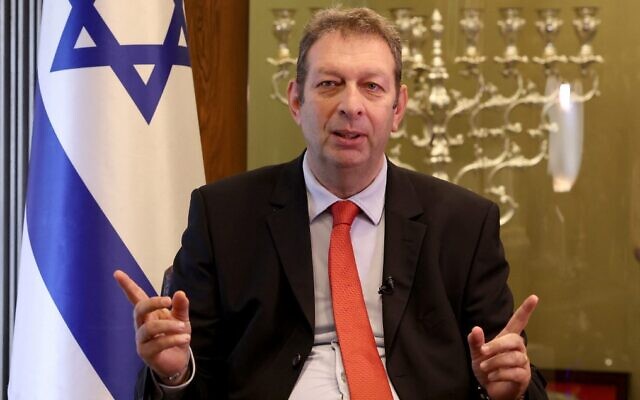 Boaz Moldawsky, president of the Israel Diamond Exchange, speaks during an interview with AFP journalists at his office in the Israel World Diamond Center, in the Tel Aviv suburb of Ramat Gan, May 16, 2022. (Jack Guez/AFP)

While India recognized Israel in 1950, it has traditionally expressed support for the creation of a Palestinian state, and did not establish diplomatic relations with the Jewish state until 1992.

“Diamonds were one of the first commodities exchanged between Israel and India in the early 1970s,” Moldawsky added.

But bilateral ties go beyond diamonds.

On Thursday, Israel’s Defense Minister Benny Gantz visited India as part of the 30th anniversary of official diplomatic links, where he urged a deepening of defense ties.

“By working together, we may increase our capabilities and ensure the security and economic interests of both countries,” said Gantz, who met with his Indian counterpart Rajnath Singh.

The pair discussed “defense cooperation” so as to combine Israel’s “technological advance and operational experience” with “India’s extraordinary development and production capabilities,” an Israeli statement read. 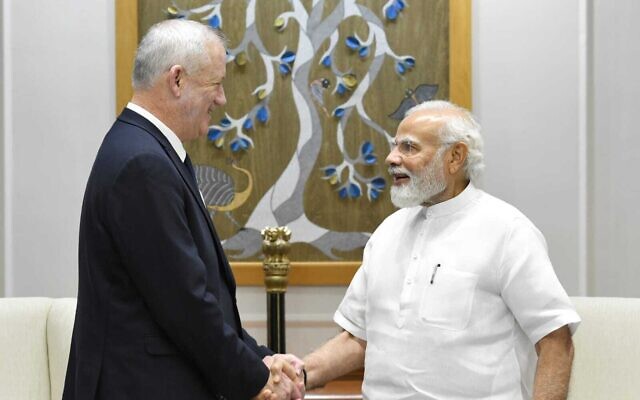 The Jewish state sells about a billion dollars of military equipment to India a year.

Cooperation agreements have also multiplied in the fields of water systems, agriculture, health and solar energy.

Ties in innovation and technology have grown closer, according to the Israel Innovation Authority, with a $40 million innovation fund set up to encourage partnerships between the two countries.

A free trade agreement is expected to be finalized later this year. 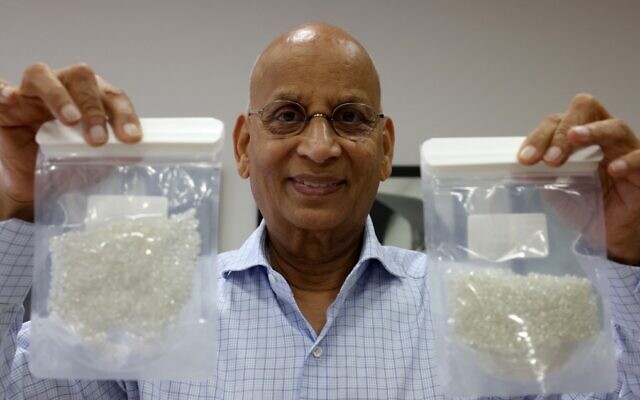 Ranjeet Barmecha, NIRU Group CEO, presents different diamonds during an interview with AFP at his office in the Israel World Diamond Center, in the Tel Aviv suburb of Ramat Gan, May 16, 2022. (Jack Guez/AFP)

In the “diamond tower,” one of the three buildings that make up the stock exchange complex, Indian diamond trader Ranjeet Barmecha delights in the bilateral ties.

Barmecha, 72, from Rajasthan in northern India, was one of the first Indians to settle in Israel in 1979, a time when there was no diplomatic representation.

“The Indian embassy was almost at my house,” he joked. Five of his six grandchildren have been born in Israel, and Barmecha — who speaks Hebrew — says he feels “at home” in the Jewish state.