At Lebanon war memorial, Gantz says next conflict to be ‘powerful and accurate’

Defense Minister Benny Gantz warned on Wednesday that if Israel is “compelled” to launch a military operation in Lebanon, it will be “powerful and accurate.”

Speaking at a memorial ceremony in the northern town of Kiryat Shmona marking 40 years since the outbreak of the First Lebanon War — also known as Operation Peace for Galilee — Gantz said the Iran-backed Hezbollah terror group would pay a “heavy price.”

“If we are compelled to carry out an operation in Lebanon, it will be powerful and accurate. It will exact a heavy price from Iran’s proxies, Hezbollah, and from the Lebanese state,” he said. “We are ready for battle, and if necessary, we will march again to Beirut, Sidon, Tyre, and wherever required.”

“We do not want a war and we are prepared to go very far in the path of peace, and in the path of settlement of the maritime border between us and Lebanon, which we must conclude quickly and fairly,” he said, referring to the ongoing dispute over the Karish natural gas field.

“In face of the threat to the citizens of Israel, no infrastructure used to harm us will be immune,” Gantz warned, but added that “our conflict is not with the citizens of Lebanon, to whom we have reached out many times, including in the past year.”

“There are paths that should be followed, the other side should have the courage to start walking,” he said.

Speaking at the same event, Israel Defense Forces chief Aviv Kohavi said that “in the next war, the scale of the attacks in Lebanon will be unprecedented.” Kohavi made similar remarks during a conference on the country’s readiness for a major emergency last week. Tensions with Lebanon have been high recently, after Hezbollah’s leader threatened Israel over plans to extract gas from a contested offshore reserve, saying that his organization is capable of preventing such action, including by force.

Israel and Lebanon are currently at odds over rights to the Karish gas field, which the Israeli government claims is in its UN-recognized exclusive economic zone, while Lebanon asserts the waters are disputed.

Talks over the field have been frozen since last year, after Lebanon tried to move its claim further into the zone Israel claims as its own. But Beirut requested the return of US energy envoy Amos Hochstein earlier this month after Israel moved a natural gas rig into its Karish offshore field.

The arrival of the vessel, operated by London-based Energean, provoked anger from Lebanon.

Israel has said it is “prepared to defend” the facility. The IDF has also deployed naval forces to the area, including a sea-borne Iron Dome anti-missile battery, according to the Kan public broadcaster. 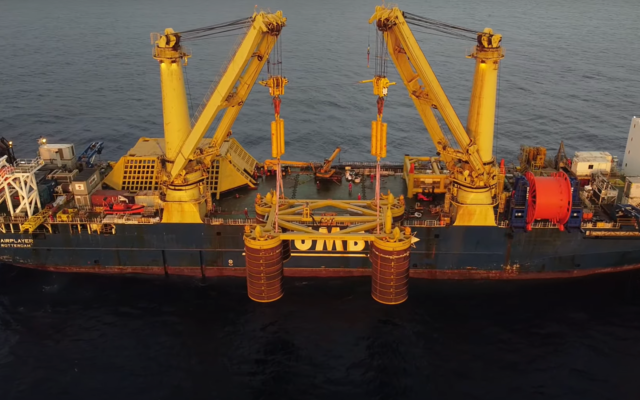 Also on Wednesday, during a meeting between senior IDF officers and a visiting delegation of officers from the US Central Command (CENTCOM), joint action plans for a multi-front war were discussed and simulated.

“The mechanisms for operational coordination between the armies, and the main points of operational, intelligence, and technological cooperation, were reviewed,” the IDF said, referring to the discussion as “a war game.”

According to the Haaretz daily, the discussion focused on a scenario of a war in Lebanon, but there was no discussion of the possibility of direct US involvement in Israeli strikes on Hezbollah.

CENTCOM officially assumed responsibility for the US military’s relationship with Israel in September last year. Until then, Israel had been kept in the area of responsibility of the European Command (EUCOM) in order to prevent possible tensions between CENTCOM and the Arab and Muslim nations under its purview, many of which did not maintain formal ties with Israel and would therefore not want to be considered as mutual allies.

In recent years, however, CENTCOM’s Arab allies have increasingly developed relations with Israel, some informally, so the issue has largely faded.

Earlier this month, the IDF held a major military exercise in Cyprus, simulating a ground offensive deep inside Lebanon in a potential war against Hezbollah.

The terror group has long been the IDF’s most significant adversary, with an estimated arsenal of nearly 150,000 rockets and missiles that can reach anywhere in Israel.

A week before that, the IDF’s Home Front Command practiced a simulation in which Israeli cities could be bombarded with 1,500 rockets a day, resulting in 80 sites being heavily damaged with some 300 casualties, during a several-day flare-up with Hezbollah.