As the coalition continues to fray and politicians shift their rhetoric towards acknowledging the possibility of elections, three main scenarios exist for the day after the government.

The leading scenario is that the opposition and defectors band together with at least 61 MKs to pass a law to disperse the Knesset.

The right-religious bloc of the opposition currently holds up to 54 votes for dispersal, including early coalition defector MK Idit Silman. Joint List leader Ayman Odeh confirmed at a Haaretz-convened event on Thursday morning that his mainly Arab opposition party would contribute its six votes toward a bill to disband the Knesset, bringing the tally to 60 votes in favor of early elections.

And earlier this week, Yamina’s Nir Orbach announced he was freezing support for the coalition, raising opposition hopes for a critical 61st vote of support.

Orbach, in his resignation letter to Bennett, said he would not vote to dissolve the Knesset “over the coming week,” but offered no guidance beyond that. The Likud is reportedly weighing whether to put the bill on the agenda for Wednesday, the opposition’s next chance to propose legislation.

If so, it would need to pass four separate votes — a preliminary, first, second, and third reading — the last three of which need a 61 MK majority to pass.

The opposition is working hard to verify whether the time is actually ripe to bring the bill. If defeated at any stage, the bill cannot be proposed again for six months, depriving it of a key weapon in its arsenal. 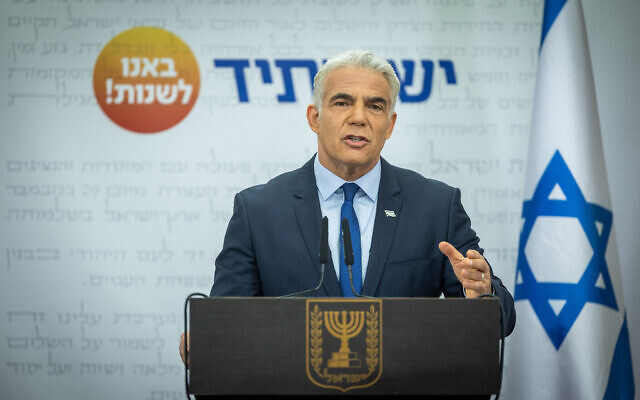 Foreign Minister Yair Lapid speaks during a meeting of his Yesh Atid faction at the Knesset, in Jerusalem, on May 23, 2022. (Yonatan Sindel/Flash90)

If the Knesset disbands, snap elections will be called, Israel’s fifth since 2019. While most of the government will remain in place in caretaker status until a new Knesset is elected and a new government is sworn in, the key question is who will be prime minister in this period.

The answer lies in who votes in the third and final reading of a bill should one come up to disband the Knesset. Under a coalition agreement, if two or more Knesset members from the right-wing bloc of Yamina or New Hope vote to disband, then Bennett automatically transfers power to Foreign Minister and Alternate Prime Minister Yair Lapid, according to sources close to the matter.

The mechanism, which is triggered no matter how many outside the bloc also support dispersal, is in place as a safeguard to ensure that right-wingers aligned with the nationalist Bennett don’t simply collapse the government to keep the center-left Lapid out of power.

If such a transition happens, Lapid will retain his foreign minister hat, and Bennett will become alternate prime minister. All other ministers will remain in place. Though he will potentially only be prime minister for the transition period, Lapid will have discretion to bring in aides and hire new staff for the Prime Minister’s Office. He will also likely enjoy an electoral boost for his Yesh Atid party thanks to having control of the prime minister’s pulpit and media levers.

The only way Bennett could remain in power during the transition would be if Yamina and New Hope MKs reverse their mutinies, and support for early elections ends up coming from elsewhere. Such a scenario is not currently thought to be in play.

The third option, preferred by Haredi parties, Religious Zionism, breakaway elements of Yamina, and some Likud members is the formation of a new right-religious coalition from within the current Knesset.

In practice, it would be enacted by 61 MKs voting to pass a constructive no-confidence motion against the current government, immediately swapping it with a new one.

In reality, such an option is currently untenable as it would require finding 61 MKs who trust Likud leader Benjamin Netanyahu and are comfortable being in a government led by him. 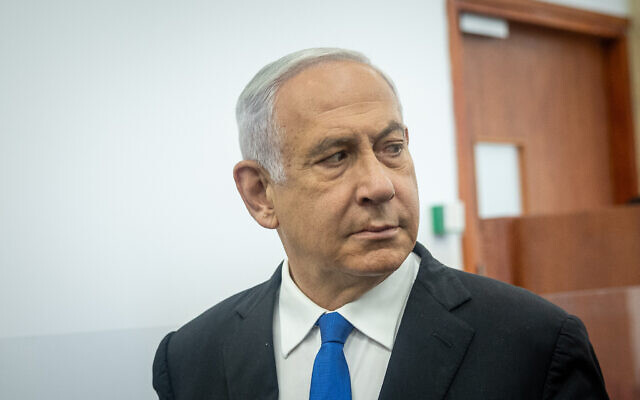 Former prime minister MK Benjamin Netanyahu arrives for a court hearing in his trial, at the District Court in Jerusalem on May 31, 2022. (Yonatan Sindel/Flash90)

Netanyahu is deeply divisive, engendering both fanatical loyalty and personal antipathy across politics. Bennett and Lapid’s eclectic, big tent coalition formed around the axis of opposition to the former prime minister.

Netanyahu has shown no willingness to step aside as leader of the right’s largest party in favor of someone who can bridge those divides. This is despite acknowledgment from other lawmakers within his bloc that a wing without its longtime leader would be able to quickly form an alternative government with the current coalition’s right-wing elements.

Shortly after the coalition lost its majority in April, United Torah Judaism leader Moshe Gafni said that the right should consider who should be its proper leader. The statement was clearly enough about Netanyahu and the fact that his leadership had blocked the formation of a right-wing government that Gafni quickly walked it back.

With Netanyahu remaining at the helm, the right-religious opposition bloc would need to find six more MKs who support returning the Likud leader to power without new elections, presuming Orbach also backs the move.

To reach the magic number, Netanyahu may have to reach out to former rival Gideon Sa’ar and his New Hope party. The parties reportedly had been in talks, though Sa’ar has denied negotiations and insists he has not changed his stance since the last election, when he ran on a platform of “just not Netanyahu.”