UNITED NATIONS (AP) — Afghanistan’s Taliban rulers are maintaining close ties with al-Qaida as they consolidate control over the country, and their main military threat is coming from the Islamic State extremist group and guerrilla-style attacks by former Afghan government security personnel, UN experts said in a new report.

The experts said in the report to the UN Security Council that with the onset of better weather, fighting may escalate as both Islamic State and resistance forces undertake operations against Taliban forces.

But neither IS nor al-Qaida “is believed to be capable of mounting international attacks before 2023 at the earliest, regardless of their intent or of whether the Taliban acts to restrain them,” the panel of experts said.

Nonetheless, it said the presence of IS, al-Qaida, and “many other terrorist groups and fighters on Afghan soil” is raising concerns in neighboring countries and the wider international community.

Since their takeover of Afghanistan last Aug. 15 as U.S. and NATO forces were in the final stages of their chaotic withdrawal from the country after 20 years, the Taliban “have favored loyalty and seniority over competence, and their decision-making has been opaque and inconsistent,” the experts said.

In the report obtained Thursday, the panel monitoring sanctions against the Taliban said its leaders have appointed 41 men on the UN sanctions blacklist to the Cabinet and senior positions, and they have favored the country’s dominant Pashtun ethnic group, alienating minority communities including ethnic Tajiks and Uzbeks.

The Taliban’s primary concern has been to consolidate control “while seeking international recognition, to re-engage with the international financial system and to receive aid in order to deal with the growing economic and humanitarian crisis in Afghanistan,” the experts said.

“Since taking power, however, there have been many factors creating internal tensions within the movement, leading to perceptions that the Taliban’s governance has been chaotic, disjointed and prone to reversing policies and going back on promises.,” they said.

As the Taliban struggle to transition from an insurgency to a governing body, they have been divided between pragmatists and hardliners who have gained the upper hand and want to turn the clock back to the group’s harsh rule from 1996 until December 2001, when they were ousted from power by US forces following the 9/11 attacks on the United States.

To date, their efforts to win recognition and aid from Western nations have floundered, largely because they have not formed a more representative government, and have restricted the rights of girls to education beyond elementary school, and of women to work and travel without a male relative’s oversight. 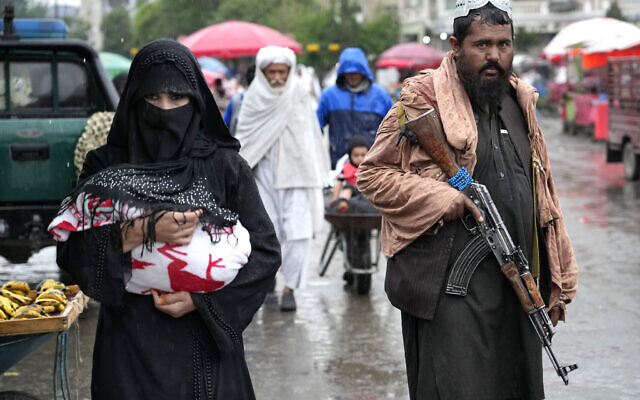 An Afghan woman walks through the old market as a Taliban fighter stands guard, in downtown Kabul, Afghanistan, Tuesday, May 3, 2022. (AP Photo/Ebrahim Noroozi)

“The central dilemma is how a movement with an inflexible ideology can engage with a society that has evolved during the past 20 years,” the experts said. “Further stresses revolve around power, resources, and regional and ethnic divisions.”

Despite these serious issues, the panel said the Taliban “appear confident in their ability to control the country and `wait out’ the international community to obtain eventual recognition of their government.”

“They assess that, even if they make no significant concessions, the international community will ultimately recognize them as the government of Afghanistan, especially in the absence of a government in exile or significant internal resistance,” the experts said.

So far, not a single country has officially recognized the Taliban, and there is growing international anger at its treatment of girls and women and its failure to keep its promise of forming an inclusive government. There are also concerns about the Taliban’s inability to keep its promise not to allow terrorist groups to operate in Afghanistan.

The panel said the Haqqani Network, a militant Islamist group with close ties to the Taliban, moved quickly after their takeover to gain control of key portfolios and ministries including interior, intelligence, passports and migration. It now “largely controls security in Afghanistan, including the security of the capital, Kabul,” the experts said. 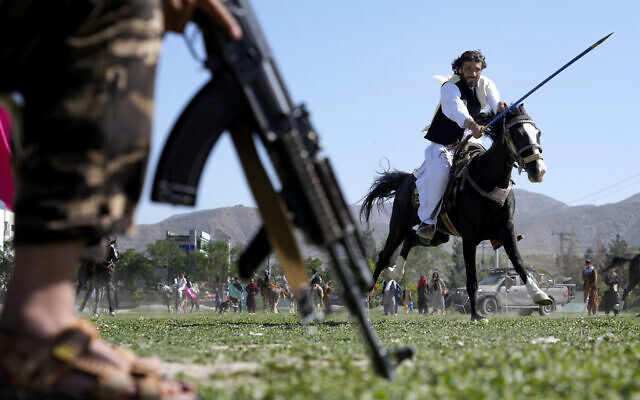 An Afghan man rushes to the target with his horse as a Taliban fighter stands guard during a spear racing in the sprawling Chaman-e-Huzori park in downtown Kabul, Afghanistan, Friday, May 6, 2022. (AP Photo/Ebrahim Noroozi)

“The Haqqani Network is still regarded as having the closest links to al-Qaida,” the panel said, and the relationship between the Taliban and al-Qaida also remains close. The experts pointed to the reported presence of al-Qaida’s “core leadership” in eastern Afghanistan including its leader Ayman al-Zawahri.

To counter the Islamic State, the report quoted an unidentified country as saying the Taliban have created three battalions of special forces called “red units.”

The Afghan Freedom Front, which only emerged recently, “has also claimed several attacks on Taliban bases in Badakhshan, Kandahar, Parwan and Samangan,” the experts said.

“Taliban forces may be hard pressed to counter several insurgencies simultaneously,” they said.