The phone conversation was part of a round of calls Lapid is making to offer Muslim leaders his best wishes ahead of the Eid al-Adha holiday beginning on Saturday.

The calls also offer a chance for the prime minister to discuss with regional leaders US President Joe Biden’s upcoming visit to Israel next week.

Lapid and Abbas spoke about “the continuation of cooperation, and the need to ensure quiet and calm,” according to Lapid’s office.

On Tuesday in Paris, Lapid told reporters that while he would not rule out the possibility of a meeting with Abbas, there were currently no immediate plans for talks to take place. His predecessor, Naftali Bennett, ruled out any such meeting and did not speak to Abbas directly while in office.

“I do not have meetings for the sake of meetings unless they have a positive result for Israel. At the moment it is not on the agenda, but I do not rule it out,” Lapid said in a briefing at Israel’s embassy in Paris. 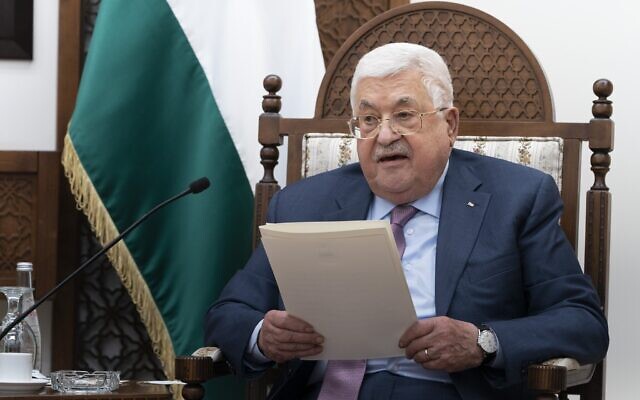 Also Friday, President Isaac Herzog spoke with Abbas to offer him and the Palestinian people a happy Eid al-Adha, and to discuss Biden’s visit.

Biden is slated to land at Ben Gurion Airport on Wednesday afternoon, where he will be greeted by Lapid in an official welcome ceremony.

Biden will then tour several Israeli security systems with Gantz, likely at the Palmachim air force base in central Israel, near the airport. The show-and-tell will include an Iron Dome missile defense battery, in a nod to US efforts to grant Israel an additional $500 million in replacement batteries for the system after last year’s Gaza war.

On Thursday morning, Biden will hold a meeting with Lapid after which the two will deliver statements to the press. Also in attendance for part of this sit-down will be Lapid’s predecessor, Naftali Bennett, who met Biden twice during his year as premier.

No major announcement from either side is expected. Biden is slated to reserve most of his remarks regarding the Israeli-Palestinian conflict for his Friday meeting with Abbas.

Biden will then travel to Bethlehem for a meeting with Abbas. The atmosphere may be clouded by the Monday announcement by the US that it did not find Israel to have intentionally killed Al Jazeera reporter Shireen Abu Akleh in clashes that broke out during an IDF raid of Jenin on May 11. 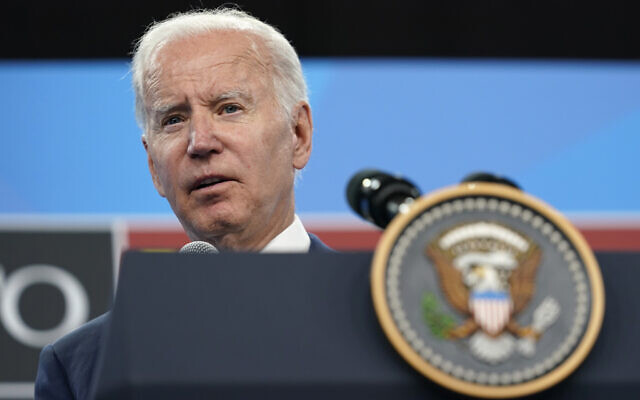 US President Joe Biden speaks during a news conference on the final day of the NATO summit in Madrid, June 30, 2022. (AP Photo/Susan Walsh)

Still, Biden will announce alongside Abbas a package of steps aimed at strengthening the PA, a senior US official said this week. Some of these “deliverables” will be US initiatives and others will be Israeli ones that Biden will announce on behalf of Lapid, who prefers keeping some distance from the concessions.

Biden then will head back to Ben Gurion Airport where he will make a rare direct flight to Saudi Arabia to attend the GCC+3 summit on Saturday in Jeddah with the leaders of the Gulf Cooperation Council — Bahrain, Kuwait, Oman, Qatar, Saudi Arabia and the UAE along with Iraq, Egypt and Jordan.