UNITED NATIONS (AFP) — The United Nations Security Council will continue negotiating Friday on extending authorization of aid transfers across Syria’s border, one day after a scheduled vote was scrapped following disagreement between Russia and the West.

Moscow is seeking a six-month extension, with the possibility to renew, while Western nations want a full year for the transfers, which are being conducted without approval from Damascus.

A vote had been set for Thursday to extend approval of the aid deliveries across the Syrian-Turkish border at Bab al-Hawa, the authorization for which has been in effect since 2014 and is set to expire Sunday.

Norway and Ireland, two non-permanent members of the 15-country Council, produced a new text Thursday evening, which would provide for a six-month extension until mid-January 2023, and then an additional six-month extension “unless the Council decides otherwise.”

The extension would also be conditional on a “substantive report” by the secretary-general, including on the operation’s transparency, progress on channeling aid across the front line, and progress on meeting humanitarian needs.

Uncertainty remained as to whether the proposal would suit Russia and whether a vote would be possible on Friday. 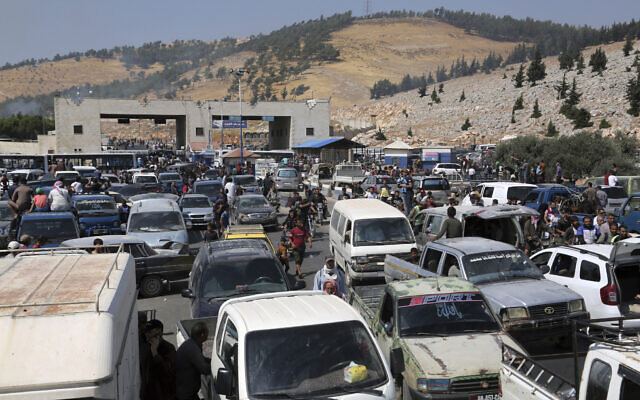 Cars and trucks line up to enter Turkey as hundreds of protesters gather during a demonstration at the Bab al-Hawa border crossing with Turkey, Syria, August 30, 2019. (AP Photo)

Nearly 10,000 trucks loaded with humanitarian aid passed through Bab al-Hawa last year, bound for the rebel-held Idlib region in northwestern Syria. It is the only crossing through which aid can be brought into Idlib without navigating areas controlled by Syrian government forces.

Moscow, which holds veto power on the Security Council and is an ally of Damascus, has curtailed a number of Western-backed measures in recent years.

It views the authorization as a violation of Syria’s sovereignty, and believes the delivery of aid to the northwest region should only be carried out from Damascus across the front line.

Russia had hinted in recent months that it would oppose an extension, having already forced a reduction in the number of allowed border crossings.

However its latest draft proposal submitted Thursday, which competes with that of Norway and Ireland, proposes extending the aid by six months, with the potential for the Council to decide in January upon another six months.

Western nations have deemed the text unacceptable, as there is no guarantee of an extension at the start of the new year.

The latest competing texts do however call for “further initiatives to broaden the humanitarian activities in Syria,” including in water, sanitation, health, education and shelter.